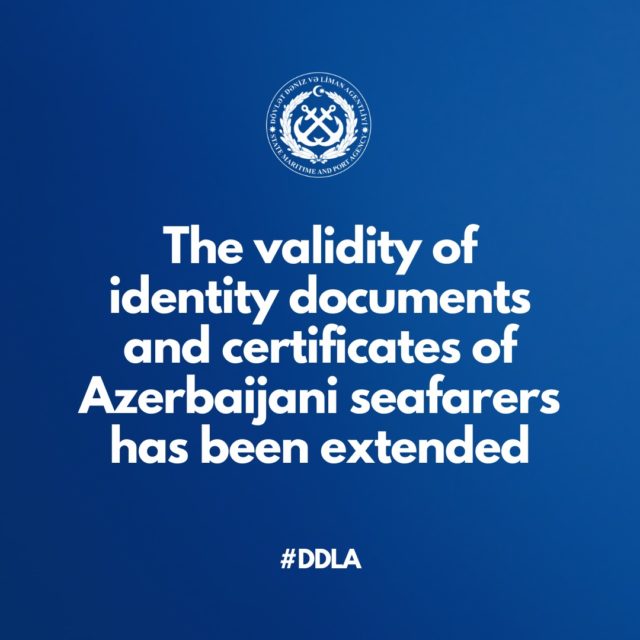 The State Maritime and Port Agency under the Ministry of Digital Development and Transport has been made a decision to extend the validity of the identity documents and certificates of Azerbaijani seafarers until 30 June 2022, in order to ensure their conformity and discharge of the responsibilities uninterruptedly.

The extension applies to the identity documents, as well as certificates issued as per the requirements of the International Convention on Standards of Training, Certification and Watchkeeping for Seafarers and national legislation of Azerbaijani seafarers who are serving on board vessels flying under the flag of the Republic of Azerbaijan and foreign flag that are expiring between the period of 1 September 2022 to 31 March 2022.

The relevant manning/crewing agencies, shipping companies, or seafarers shall submit the following documents in addition to the application for the extension of the validity to the email of the State Maritime and Port Agency – [email protected]:

At the same time, seafarers for the issuance and revalidation of their certificates, as well as special training certificates that are expiring until 1 September 2022 may apply accordingly to the Agency and maritime and training institutes that have obtained the Certificate of compliance as required by the International Convention on Standards of Training, Certification and Watchkeeping from the Agency.