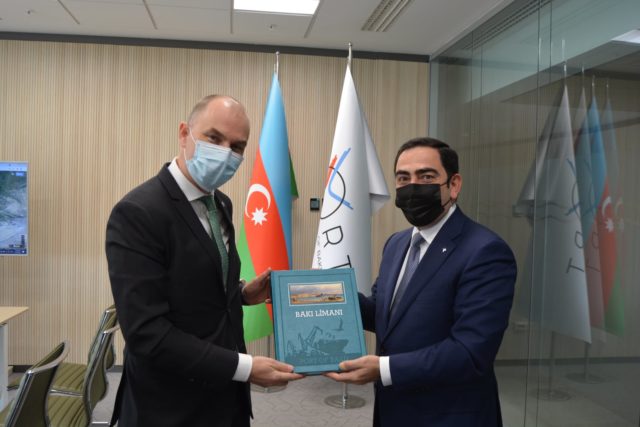 A delegation led by David Cullen, Head of Department of the European Commission’s Directorate-General for Neighborhood Policy and Enlargement Negotiations, visited the new Port of Baku in Alat today. Welcoming the guests, The Director-General of the “Baku International Sea Trade Port” CJSC Taleh Ziyadov stated that the Port of Baku plays an important role as a transport hub between Europe and Asia due to its modern infrastructure, carrying capacity and location, and plays an active role in the development and promotion of the Trans-Caspian International Transport Corridor. He noted that the port closely cooperates with the European Union and since 2016, 5 TAIEX and 3 long-term technical assistance projects have been implemented. In this context, experience is being exchanged with European partners on digitalization, port operations, management, human resources, the establishment of a Regional Training Center in the port, labor and environmental protection, and public relations. The meeting was attended by representatives of the European Investment Bank, the European Bank for Reconstruction and Development, as well as a number of European international financial institutions where the Director-General noted that the Port of Baku was awarded the “EcoPorts” certificate of the European Seaports Organization for the first time in 2019 and again this year. He noted that the Port of Baku is the first port in the Caspian Sea to receive the status of “Green Port”, and one of the 30 ports in Europe. The Director-General said that the Port of Baku has established cooperation with European companies in the field of education and exchange of experience. It was noted that a Memorandum of Understanding was signed between Belgium’s “APEC Port Training Center” of the Port of Antwerp, Fontys University of Applied Sciences of the Netherlands, Guilde Institute and “Cabooter Group”, a leading logistics company in the region. According to the Memorandum, representatives of the Port of Baku and Azerbaijani companies operating in the field of logistics or those wishing to work in the field of transport, trade and logistics in general, will be involved in short-term and long-term training programs in these countries. David Cullen, Head of Department of the European Commission’s Directorate-General for Neighborhood Policy and Enlargement and the Head of the European Union’s Delegation to Azerbaijan, Ambassador Peter Michalko, stressed the importance of the Port of Baku’s economic and investment plan, which has been awarded the status of “Green Port”, as the number one flagship project. Afterwards, the guests were presented with a book about the history of the Port of Baku up until to its present day and gifts made with national ornaments.

After that, the delegation got acquainted with the working principle of the Port of Baku terminals on the spot and their questions about the work process were answered. A memorial photo was taken at the end.