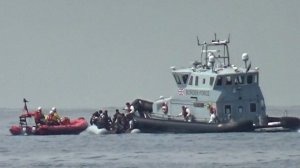 At least 482 migrants crossed the English Channel in 21 small boats on Wednesday, the Home Office has said, setting a new record for a single day.

The Ministry of Defence had earlier confirmed that an exercise on its firing range at Hythe had to be stopped when people landed on the beach there.

“These numbers are unacceptable, that’s why we are taking action on all fronts.

“Law enforcement agencies are dismantling the people smuggling gangs. Joint work with the French has seen a doubling of police officers on French beaches.”

The previous highest totals of daily arrivals on small boats in recent years were 416 people on 2 September 2020, and 430 migrants on 19 July.