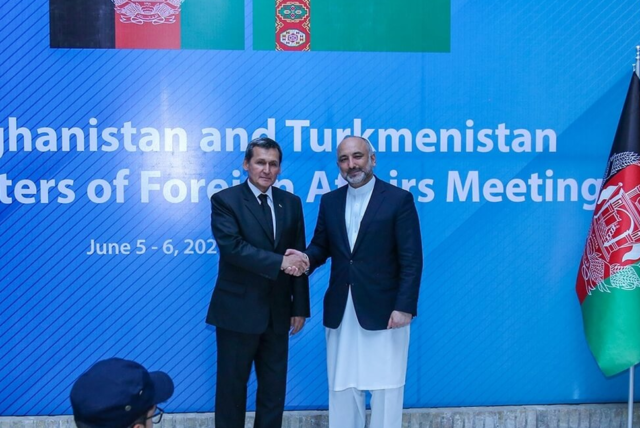 High-level delegations of Turkmenistan and Afghanistan during talks in western Afghan city of Herat on June 5-6 discussed implementation of key regional energy and transport projects and intensification of trade ties.

Turkmen delegation was led by the Deputy chairman of the Cabinet of Ministers, Foreign Minister Rashid Meredov, while the Afghan side was led by Foreign Minister Mohammad Haneef Atmar. The delegations included economic advisers, heads and representatives of the energy and transport sectors of the two countries, heads of national financial institutions and international companies involved in the implementation of joint projects, the Turkmen Foreign Ministry said in its press release.

During discussions on transport ties, the sides exchanged views on the construction of the Turgundi-Herat railway line with the participation of the Turkmen side.

The Afghan delegation also provided comprehensive information to their Turkmen counterparts on the country’s estimated $200-billion-worth of various resources and rare stone, which it said would be significant in strengthening and expanding trade with Ashgabat, considering the demand in regional countries, particularly Turkmenistan, for marble.

“Highlighting the construction projects for building new cities in Turkmenistan, the Turkmen delegation discussed their requirement for marble and expressed Turkmenistan’s full readiness to procure marble from Afghanistan,” Afghan Foreign Ministry said in the statement.

The two sides agreed to sign an agreement on Afghanistan’s marble export to Turkmenistan.

On January 14, President of Turkmenistan Gurbanguly Berdimuhamedov and President of Afghanistan Ashraf Ghani took part via video link in the inauguration ceremony of a number of joint infrastructure projects aimed at bolstering bilateral and regional ties.