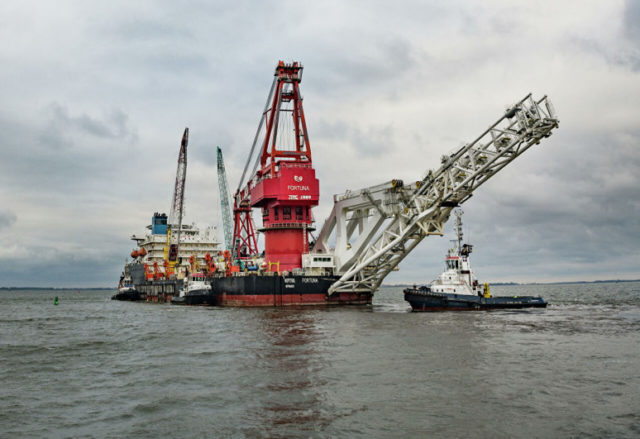 The U.S. will impose and immediately waive sanctions on the company overseeing construction of the Nord Stream 2 gas pipeline from Russia to Germany, people familiar with the matter said, a move meant to bolster ties with Berlin that sparked criticism the Biden administration is soft on Russia.

In a report to Congress on Wednesday, the State Department will say that Nord Stream 2 AG and its chief executive Matthias Warnig are engaged in sanctionable activity under U.S. law but that the Biden administration decided to waive the sanctions for national security reasons, according to the people, who spoke on condition of anonymity.

The decision not to sanction Nord Stream 2 and Warnig, a German citizen, avoids escalating a confrontation with Chancellor Angela Merkel’s government and is in keeping with Biden’s goal of working closely with allies despite their disagreements as it seeks to achieve other priorities, such as confronting China and Iran.

It also came hours before Blinken was set to meet Russian Foreign Minister Sergei Lavrov on the sidelines of an Arctic Council meeting in Iceland as the two sides prepare for a summit in the coming weeks between President Joe Biden and President Vladimir Putin.

The Biden administration is looking to pressure Germany into halting the nearly-complete pipeline, holding out the possibility that it could revoke the waiver and impose the sanctions. But the latest moves won’t satisfy members of both parties in Congress who want to see the pipeline stopped, arguing it makes European nations more dependent on Russia and rewards Putin at the expense of national security concerns.

“The administration’s decision to waive the sanctions they placed on Nord Stream 2 AG and the company’s CEO Matthias Warnig citing U.S. national interests is just wrong,” Senator James Risch of Idaho, the top Republican on the Senate Foreign Relations Committee, said in a statement. The administration’s plans were reported earlier by Axios.

“This move contradicts everything that President Biden and Secretary Blinken have previously said about Nord Stream 2’s malign influence and is a gift to Putin that will only weaken the United States’ leverage in the lead up to the impending Biden-Putin summit,” he added.

Reports that the sanctions were being waived were greeted with relief in Russia, where shares of Gazprom PJSC rose as much as 2.8% before paring gains amid a broadly weaker Russian market. Analysts at BCS Global Markets said a softer U.S. stance on Nord Stream 2 is positive for the stock.

The pipeline became a major source of friction between the U.S. and its European allies, particularly Germany, during former President Donald Trump’s administration. Biden has essentially taken the same position as Trump: that the project undermines European security by tying the continent more closely to Moscow.

But Biden also is also wary of punishing allies like Germany over the issue, part of a broader attempt to overhaul how the U.S. conducts diplomacy and heal some of the rifts with other nations created by Trump’s “America First” approach to foreign policy. U.S. officials have also argued their options were extremely limited given that the pipeline was 90% complete when Biden came into office.

“It is a good moment not only for Nord Stream 2, but also for the U.S.-Germany and the U.S.-Russia relationship,” said Katja Yafimava, senior research fellow at the Oxford Institute for Energy Studies. “Sanctioning NS2 would not stop the project but it would further increase the U.S. tensions with Russia, at the time when both countries appear to be looking at least to prevent their relationship from further deterioration.”

The administration has come under pressure from lawmakers of both parties to block Moscow-based Gazprom’s project after a congressionally-mandated report released in February named only one vessel — the Russian-flagged Fortuna — as subject to sanctions.

Advocates for taking action in Congress argue that U.S. law requires sanctions against any foreign entity if it assisted in construction of the pipeline. They also say that while the U.S. may be seeking to ease strains with Germany, it risks alienating other allies such as Ukraine, Poland and the Baltic states.

The 1,230-kilometer (764-mile) pipeline will help Germany secure a relatively low-cost supply of gas amid falling European production. It’s also part of Gazprom’s decades-long effort to diversify its export options to Europe as the region moves away from nuclear energy and coal.