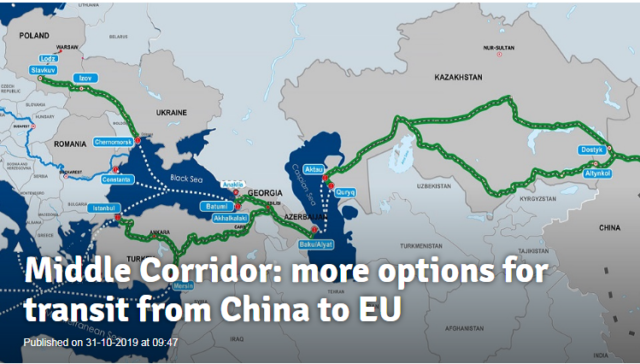 Six years after the official launch, the Marmaray Tunnel that connects the European and Asian part of Turkey has been opened for rail freight operations. As a result, containers from China to Europe could be delivered faster by the so-called Middle Corridor that runs through Kazakhstan, Azerbaijan, Georgia and Turkey. The route has two other branches running via Romania and Ukraine. All the routes of the Middle Corridor bypass Russia and, in such a manner, create new opportunities for the shippers and forwarders.

The Marmaray Tunnel is located beneath the Bosphorus Strait, a narrow channel that divides Istanbul and is the natural border between Europe and Asia. It has an important significance not only for Turkey but for the whole Trans-Eurasian land logistics. For six years since its opening at the end of October 2013, the railway tunnel was only available for passenger trains running between different sides of Istanbul.

The installation is accessible for rail freight operations since mid-October of this year, when the first freight train with 42 containers travelled through it on the way from the Chinese city of Xi’an to the Czech capital city of Prague. This delivery was organised by ADY Container, a subsidiary of Azerbaijan Railways, and China’s Xi’an Continental Bridge International Logistics together with their partners from Kazakhstan, Georgia and Turkey.

The above-mentioned journey has set a new milestone for the Middle Corridor. By including the Marmaray Tunnel, this route became much less complex because it eliminated one of two sea legs. Earlier, the corridor included two ferry services on the Caspian and Marmaray Sea.

From Istanbul, the containers can easily be transported to various European countries. The remaining Caspian sea leg is accommodated by a ferry link between Baku in Azerbaijan and the Kazakh ports of Aktau and Kurik. This is available for single containers and railway flatcars loaded with containers. This allows logistics companies to avoid additional transhipment operations and eventually reduce delivery time.

Text continues below the picture

The route via Turkey and the Marmaray Tunnel is not the only route within the Middle Corridor. It has two other branches that still require a ferry connection on the Black Sea. The first branch runs from the Georgian port of Batumi to the Romanian port of Constanta. On 22 October, ACSC Logistics, a subsidiary of Azerbaijan Caspian Shipping, GR Logistics & Terminals (Georgia) and Grampet Group (Romania) signed an agreement for launching a feeder ferry service between two mentioned ports. This will allow the companies to establish a stable and convenient leg within the corridor.

The other Black Sea branch of the Middle Corridor goes northwestward to Ukraine. In January 2016 a container train from Chornomorsk seaport to the Kazakh railway station of Dostyk at the Chinese border made a test ride. It took around 16 days to run the entire distance including two ferry connections: one between Chornomorsk and Batumi, another between Baku and Aktau.

However, the further development of the route through Ukrainian is hindered by a long-pending issue with two state-owned ferries Geroi Shipki and Geroi Plevny, operated by Ukrainian Railway (UZ). Since 2016, they are standing idle. First, they required maintenance works. Now, the government should decide their future: to remain under control of Ukrainian Railway or transfer them to another state-owned company. In 2000-2015, both ships were rented to UkrFerry, a private Ukrainian shipping company that provides ferry services in the Black Sea.

At the initial stage, the participants intended to develop multimodal transportation routes between their respective countries, especially in the direction from Kazakhstan to the seaports of Georgia. Later, other countries such as Ukraine, Romania, Turkey, Poland joined the Middle Corridor. As a result, it opened new possibilities for transporting cargo from China to Europe.