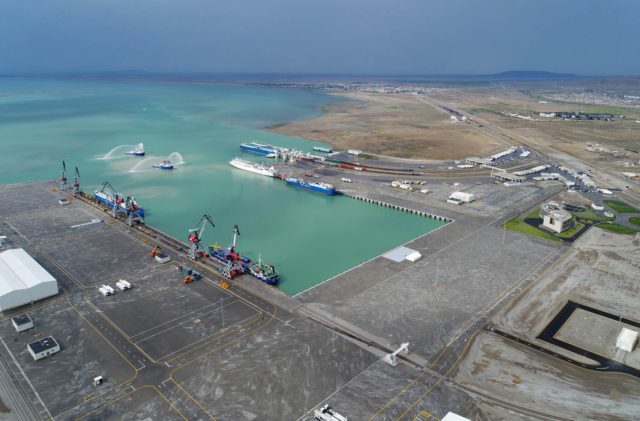 Azerbaijan and Georgia are actively developing their transit potential and are vigorously establishing communication flows through the Caspian Sea and Black Sea, Russian Minister of North Caucasus Affairs Sergei Chebotarev said on May 14.

“It is important for us to make Russia a full participant of all these processes in the Caspian Sea and Black Sea,” Chebotarev added, Trend reports referring to RIA Novosti news agency.

He stressed that Russia has a huge potential and all possibilities for cargo and passenger flows to pass through the North Caucasus.

“The issue is the creation and development of the Russian ports in the Caspian Sea,” the minister said. “By the way, Russian President Vladimir Putin stressed the need to create a port near Kaspiysk city when he took part in a summit of Caspian countries in Kazakhstan in August 2018 and we must implement this plan.”

“Some say the Russian ports in the Caspian Sea have been loaded only by 20-25 percent and therefore there is no need to develop them,” the minister added. “The destroyed sandboxes can be mentioned as an example. When the sandbox is destroyed in one yard but there is a new sandbox in neighboring yard, no one goes to play in the destroyed sandbox. Everyone goes to the neighboring yard. As soon as the sandbox is repaired, it immediately becomes popular among children. There is the same situation with the ports.”

“The ports in Azerbaijan and Georgia are working,” Chebotarev said. “They have been loaded sufficiently. Two ports are now operating on the same site in Georgia – in Poti and Batumi. The third port of Anaklia is being built. Huge funds are being invested there, including foreign ones.

“Just imagine three ports in Georgia are on the small Black Sea coast,” he added. “Therefore, we can not stay away. The development of the Russian ports in the Caspian Sea and Black Sea opens up new opportunities for entering the world market.”

“The next step after the development of the Caspian ports is to connect the ports of the Caspian Sea and Black Sea with the modernized railways and highways,” Chebotarev added.