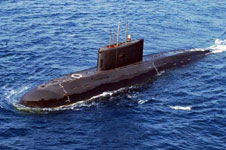 Russia’s Borei strategic missile submarines are doubly quiet than the US Virginia class, Director of the Kurchatov Institute R&D Center Alexander Blagov said at a roundtable discussion on the occasion of the 60th anniversary of the country’s nuclear submarine fleet, Trend reports referring to TASS.

Project 955 and 955A (Borei and Borei-A) submarines have been developed by the Rubin Central Design Bureau of Marine Engineering. The Sevmash Shipyard in Severodvinsk in northwest Russia continues building a series of eight such submarines.

The distinctions of Project 955 and Project 955A are unknown. However, according to open sources, the Borei-A sub features the modernized hull and new electronics compared to its predecessor. Also, Project 955A subs have better stealth capabilities.