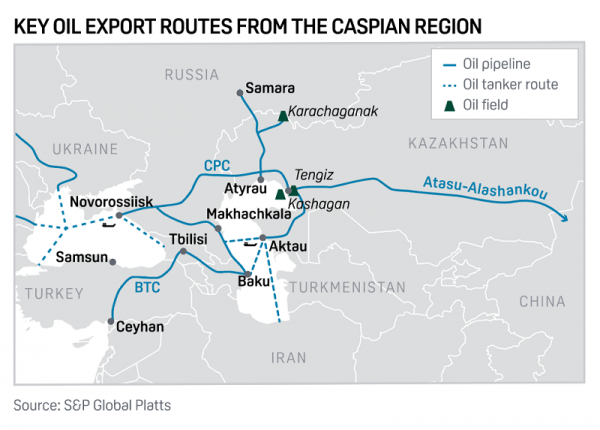 The operator of Kazakhstan’s highest-producing oil field, Tengiz, said Jan. 6 that a logistics issue had caused it to adjust production levels as political protests continue at the site, which is the biggest source of the CPC crude export blend.

It was unclear whether the logistical problem related directly to political protests that have been taking place at the remote site on Kazakhstan’s Caspian Sea coast, or to wider disruption resulting from the country’s political crisis.

In an emailed comment, the Tengizchevroil consortium, comprising Chevron (50%), ExxonMobil (25%), KazMunaiGas (20%) and Lukoil (5%), confirmed that contract workers at Tengiz were still “gathered” in “support of protests taking place across Kazakhstan” and said efforts were underway to resolve the situation.

“TCO is focused on ensuring the safety and well-being of its workforce at Tengiz and maintaining safe operations,” the consortium said. “TCO production operations continue, however, there has been a temporary adjustment to output due to logistics.”

The Tengiz site is a major industrial facility, with a $45 billion expansion project underway in recent months involving as many as 30,000 workers.

The field has an official capacity of 600,000 b/d, making it the top contributor to CPC crude blend, loaded at Novorossiisk on Russia’s Black Sea coast. However, actual production has at times exceeded that level. The expansion project is intended to raise oil production capacity to 850,000 b/d by around 2024.

Kazakhstan, the second-largest oil producer in the former Soviet Union, with around 1.6 million b/d of production, has been rocked by bloody unrest in recent days, thought to have resulted in numerous deaths, which was sparked initially by a liberalization of road fuel prices.

On Jan. 5, President Kassym-Jomart Tokayev pledged to reimpose price controls, going on to remove former president Nursultan Nazarbayev from the post of national security council chair and requesting security assistance from a group of ex-Soviet countries led by Russia, with Russian forces now deployed to the country, according to media reports.

S&P Global Platts Analytics sees Kazakh oil output reaching 2 million b/d by 2024 and 2.6 million b/d by 2030, making the country one of the few OPEC+ members with a rising production trajectory.

Earlier on Jan. 6, Shell said production continued normally at the other two main fields contributing to CPC, Kashagan and Karachaganak, and the CPC export pipeline was “fully functional.”

However, Shell underlined it’s concern, saying: “We are following developments in Kazakhstan closely. We are focusing on keeping our people and operations safe, working closely with our venture partners. As of Thursday 1000 GMT, production continues at [Kashagan operator] NCOC and [Karachaganak operator] KPO, and CPC is fully functional,” the company told S&P Global Platts.

“We are keeping the situation under constant review,” Shell added.

Unlike in Russia, international oil and gas companies have underpinned Kazakhstan’s rise as a producer. Other major stakeholders in Kazakhstan’s top fields include Italy’s Eni, ExxonMobil and TotalEnergies, as well as Russia’s Lukoil and China’s CNPC.

TotalEnergies, a partner at Kashagan, told Platts it was “closely monitoring the current situation in the country and ensuring that the safety of its employees and contractors is guaranteed.”