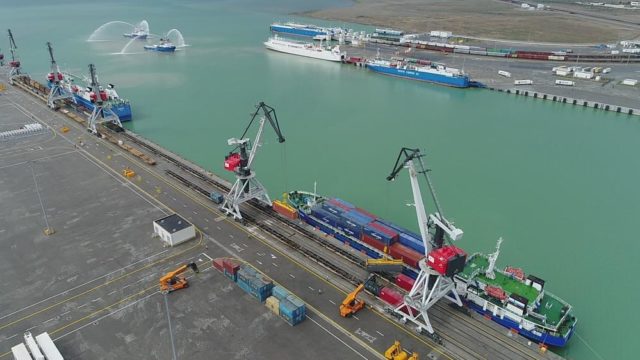 Uzbekistan is interested in developing the Trans-Caspian transport Corridor through Azerbaijan and Turkey to Europe, Trend reports, referring to the statement of Aziz Voitov, the First Deputy Minister of Investment and Foreign Trade of Uzbekistan.

He also stressed the importance of the route through the Central Asian countries to India, China and Pakistan.

The creation of a Single electronic trading platform will allow entrepreneurs to cooperate more closely and eliminate tariff and non-tariff barriers, Voitov added.

The meeting of the Ministers of Economy of the participating countries of the Cooperation Council of Turkic-speaking States (Turkic Council) was held in Baku.

The meeting was chaired by the Secretary-General of the Turkic Council Baghdad Amreev and the Minister of Economy of Azerbaijan Mikayil Jabbarov, with the participation of the Ministers of Kyrgyzstan, Kazakhstan, Uzbekistan, Hungary, and Turkey.

Within the context of the event, the possibilities of expanding economic cooperation between the Turkic-speaking countries were discussed.

The ministers also discussed the organization of the working and investment forums of the Turkic Council, which will be held in Budapest and Bishkek.