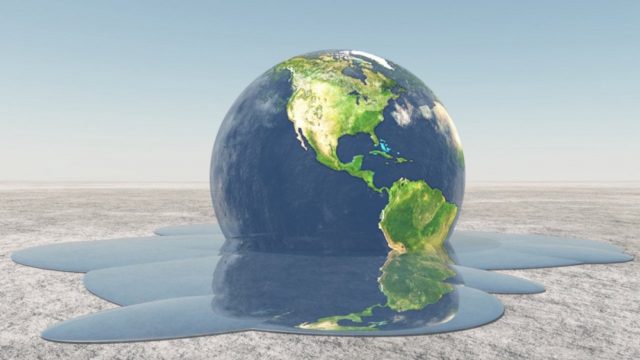 “Even those of us not particularly cognizant of the climate crisis could not help but be alarmed by what has been happening around us lately. While massive floods in Germany and Western Europe claimed the lives of hundreds, entire villages in China and India were being washed away by heavy rains. Giant hailstones rained down on Italy in the middle of summer, and Britain and Switzerland were surprised by sudden wild and rainy weather. Sardinia, Greece, and Siberia were hit by widespread fires, and in California, temperatures reached unthinkable records of 56 degrees Celsius, leaving residents feeling as though they were sweltering in a real-life oven,” says the article by Deputy Chief of Mission at Israel’s Embassy in Azerbaijan Doron Pe’er.

The article says: “Considering all this, the important report released this week by the Intergovernmental Panel on Climate Change should serve as a serious warning sign for us all. We must change our ways and transition to a lifestyle and economy that supports – not disrupts – planet Earth’s climate, nature, and environment.

The testimonies of the hundreds of scientists who took part in the writing of this report, on the basis of thousands of well-established and diverse scientific studies, are extremely important. The time for change has come. Change, however, is difficult, and we need success stories, peer learning, and technologies that will help us move to a zero-emissions economy by 2050 and halve humanity’s greenhouse gas emissions by 2030.

If you look around for inspiration and good ideas, you’ll find that Israel stands out from the crowd. Over decades, Israel has learned to establish agriculture in the desert and arid areas, to recycle 90% of its wastewater, and to desalinate drinking water. It has developed breathtaking solutions for energy storage, energy efficiency, and renewable energy, has cultivated a groundbreaking industry of animal protein substitutes, and knows how to preserve forests in conditions of drought and aridity. Israel is a living laboratory for the development of practical solutions to the climate crisis.

Israel’s climate innovation can help the entire world develop the capabilities it so needs to adapt to the climate crisis and build resilience. Take, for example, the incredible developments that are taking place in research institutes and the private sector in Israel in the field of animal protein substitutes. Products such as meat, milk, eggs, and more are being produced in laboratories using methods that emit almost no greenhouse gases, and which allow huge swaths of agricultural land currently being used for livestock purposes to be freed up for ecological restoration and reforestation. As if this weren’t enough, these technologies also pave the way for increased global food security during an era of climate crisis.

Israel’s climate innovation is also very much needed to reduce greenhouse gas emissions, and provides some of the most fascinating solutions in the world today in the fields of compressed-air energy storage, energy generation from sea waves, the use of advanced computing tools for energy management, and more.

If we are the objects of life, then we must cooperate with one another. It is clear to everyone today that there is not one single country, strong and developed as it may be, that can cope with this unprecedented crisis in human history alone. We need to harness all of humanity’s amazing abilities together in order to turn this huge ship that is planet Earth – that we all are on, shoulder to shoulder – towards a safe shore. The only way to do this is by working together, sharing information and experience, and providing mutual support. Israel is willing to contribute its share of experience, as well as to learn from the experiences of others.

Israel and Azerbaijan can and should partner on that topic, as well as in many other fruitful partnerships the countries already build and maintain. The dialogue between Israeli and Azerbaijani Energy Ministries should focus on CleanTech and Renewable Energy sources, a process that is already in the making. Israeli capabilities and experience should pair with Azerbaijan’s long experience in the field of Energy on two levels – state reforms and G2G cooperation and exchange of best practices; and mutual projects which would incorporate Azerbaijani needs and Israeli technologies, both on G2G and G2B levels. These projects should rely on in depth short term and long term ecological analysis and hazard surveys.

The simplest, yet one of the most pressing project that should be implemented is the founding of desalination plants and wastewater treatment facilities, which would in turn assist not only in fighting global and regional warming and pollution, but would also address one of Azerbaijan’s immediate need in reducing water losses and increase its agricultural productivity.

Another field of cooperation could be implemented through recycling: sharing knowhow and experience, alongside an educational program and the introduction of the regulatory and de-facto structures and facilities which supports recycling initiatives could be a great starting point.

There are plenty more ideas and initiatives that our countries could implement together, in order to deescalate the current climate crisis – and preserve the future of our world and our children. It is our duty to preserve a clean, healthy world for them to flourish in.”