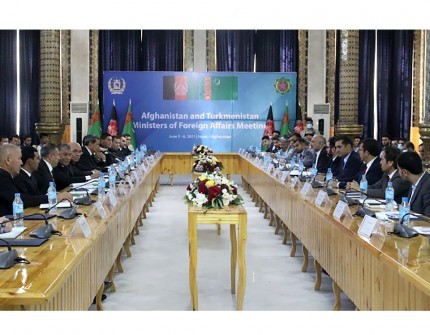 During a working visit to Afghanistan on June 5-6, a high-ranking delegation of Turkmenistan led by Vice-Chairman and Foreign Minister Rashid Meredov held successful negotiations on the implementation of large energy and transport projects, the website of the Foreign Ministry of Turkmenistan reports.

On the first day of the visit, extended consultations of the Turkmen and Afghan delegations were held under the leadership of the Foreign Ministers of Turkmenistan and Afghanistan Rashid Meredov and Mohammad Hanif Atmar. The negotiations were attended by economic advisers, heads and representatives of the energy and transport sectors of the two countries, as well as heads of national financial institutions and international holdings involved in the implementation of joint projects.

Practical issues of implementation of new stages of the TAPI project, including logistic, technical and financial aspects, were considered.

Having emphasized the importance of the TAPI project from a geopolitical and geo-economic point of view, Rashid Meredov noted that the construction of the gas pipeline was one of the important energy projects on the Eurasian continent.

Then a section on the practical implementation of the project for the construction of a high-voltage power transmission line along the route Turkmenistan-Afghanistan-Pakistan was held. In this regard, the successful launch in January 2021 of the power transmission line in the direction of Kerki (Turkmenistan) – Shibergan (Afghanistan) with the participation of the Presidents of the two countries was noted. Today, through the line, electricity from Turkmenistan is supplied to the Afghan city of Mazar-i-Sharif.

During the consultations, further possibilities for increasing the supply of electricity from Turkmenistan to Afghanistan were discussed. The Minister of Energy of Turkmenistan Charymyrat Purchekov made a presentation on the implementation of the Turkmenistan-Afghanistan-Pakistan energy project.

Parties also discussed issues on further cooperation in expanding the network of railway lines of the two countries, which is intended to have a beneficial effect on economic integration in the region. Concrete results of cooperation in this direction were noted. In 2016, with the participation of the Presidents of Turkmenistan and Afghanistan, the Kerki-Imamnazar line was commissioned. In early 2021, the opening of a 30-kilometer rail section between Akina-Andkhoy stations in Afghanistan took place. The parties are currently negotiating on the acceptability of the project for the construction of the Turgundi-Herat railway section.

During the consultations, they also discussed measures aimed at unlocking the potential of the international transport corridor «Lapis Lazuli». In this context, the readiness of the Turkmen side to cooperate with partner countries on the creation and promotion of joint mechanisms to optimize the functionality of this corridor was confirmed.

Also, consultations were held on a number of other issues of Turkmen-Afghan interaction, including water resources management, deepening ties in industry, construction and others.

Following the consultations, the foreign ministers of the two countries noted the effectiveness of the talks.