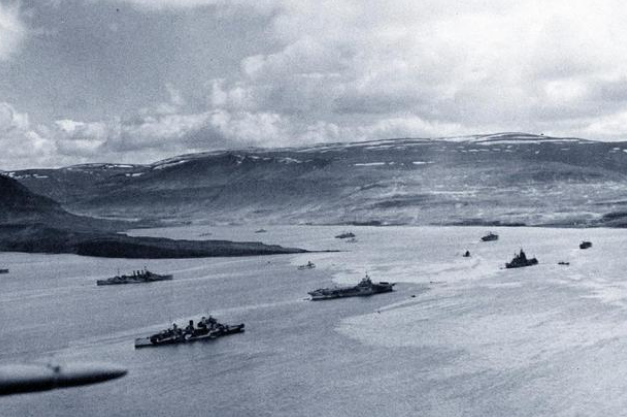 A world war is more than just a war fought all over the world. It’s a war where multiple, disparate theaters of operations are linked together such that what happens in one theater affects the pace and scope of activity in other theaters.

Thus, the outcome of a naval battle at Midway had an impact on the timing of the Allied invasion of North Africa. The situation on the Eastern Front had a direct bearing on the quantity of tanks sent to the British 8th Army in Egypt.

This co-dependence of military activity means that even minor theaters of operations can have far-reaching consequences on the outcome of the global conflict.

Seventy-eight years ago, next month, on the heels of the Nazi invasion of the USSR, the British government dispatched the first convoy in what would become a major, sustained Anglo-American effort to supply the Soviet Union with much-needed military equipment and supplies for the duration of World War II.

The Arctic convoys, one of the three principal routes through which supplies flowed, is a little-known theater of WWII. It would play an important role in the prosecution of the war, especially in the critical months between July and December 1941, as the Soviet army buckled under the weight of the Nazi onslaught.

Both British and American intelligence agencies had predicted the attack. It was impossible to assemble an army of that size and expect it to go unnoticed. The Wehrmacht didn’t even try to conceal the troop buildup.

Soviet leader Josef Stalin ordered aerial reconnaissance of the Soviet Union’s western border beginning on June 18. The resulting reports documented that the “frontier regions west of the state border were packed with troops.”

In the three weeks prior to the invasion, Soviet border guards had apprehended more than 300 spies and saboteurs attempting to cross into the USSR. Stalin himself was warned of the exact time and day of the invasion by a Russian spy in Tokyo, Richard Sorge, who had access to diplomatic cables between Tokyo and Berlin.

Both Churchill and U.S. President Franklin D. Roosevelt were strongly anti-Bolshevik. U.S. and British troops had intervened in the Russian civil war, from 1918 to 1922, in support of anti-Bolshevik forces. Both blamed Stalin for the Molotov-Ribbentrop Pact that had made possible the German-Soviet dismemberment of Poland and paved the way for the beginning of World War II. Neither side trusted the other.

His long history as an anti-Bolshevik notwithstanding, Churchill immediately dispatched 40 Hawker Hurricanes and 500 mechanics and pilots to provide air defense for the Soviet port of Archangel. By the summer of 1941, German bombers had mostly switched to night raids. There was little that Fighter Command could do at night, so the Royal Air Force had a temporary surplus of fighters.

Great Britain would deliver a total of 3,000 Hurricanes and 4,000 other aircraft, among other military equipment and supplies, to the Soviet Union between 1941 and 1945.

The first British convoy, the only one to actually have a name, was called Dervish. Churchill sent reporters and an artist to provide a record of the voyage. The convoy sailed from Scapa Flow on Aug. 17, 1941, for Iceland and, hugging the polar ice, arrived in Archangel on Aug. 31.

The Germans were unaware of the convoy until Churchill announced its successful completion in the House of Commons. Hitler was infuriated by its success and ordered German naval units to be redeployed to Norway to interdict future convoys. That’s how the Tirpitz came to find itself in Altafjord near Tromsø, where it was eventually sunk by British bombers.

In July 1941, Roosevelt dispatched Harry Hopkins to Moscow to meet with Stalin and offer the Soviets Lend-Lease assistance. By October 1941, U.S. military equipment and supplies were being delivered to the Soviet Union.

One of the critical items delivered to the Soviets during 1941 were heavy tanks. In the summer of 1941, the bulk of the Soviet tank force was comprised of T-26 tanks. The T-26 was a light tank mostly deployed with infantry units for support.

The T-26s were obsolete. Even when massed together, they were no match for German Panzer units. Between June and December 1941, the Soviets lost approximately 15,000 tanks, half of their force.

Great Britain supplied the Soviets about 900 heavily armored Matilda II tanks until the T-34 went into mass production in 1942. The tanks had been earmarked for the British 8th Army in Egypt. The first tanks delivered to the Soviets arrived in desert camouflage. By December 1941, a third of Soviet heavy tanks deployed on the Eastern Front were the British Matildas.

The 8th Army’s tank needs were eventually met by U.S.-supplied Sherman tanks. The first operational deployment of Sherman tanks against Panzers was in the eastern desert in Western Egypt. The tanks arrived in Egypt unpainted because the U.S., having never before deployed tanks in a desert environment, did not have any approved desert camouflage stencils. In total, British aid to the Soviet Union, which was independent of Lend-Lease, provided Moscow with four million tons of equipment and supplies during the war, free of charge.

U.S. Lend-Lease aid to the USSR amounted to $11.3 billion, about 23 percent of the program, or the equivalent of $158 billion today. The aid consisted of food, oil, military equipment and supplies.

After the war, Stalin offered the U.S. $170 million to settle the USSR’s Lend-Lease debts. The U.S., which had asked for $1.3 billion, refused the settlement. Contrary to the widely held view that the USSR was the only country to ever pay back its Lend-Lease debts, they remained unpaid.

In 1972, the Nixon administration advised the Soviets that it would block U.S. grain shipments to the USSR unless Moscow settled its Lend-Lease debts. These were subsequently resolved for $722 million.

There were three principal routes used to ship supplies to the Soviet Union.

The Arctic convoy route ran from Iceland and U.K. ports up over the top of Scandinavia into Archangel and Murmansk.

The Persian Corridor ran from Basra in the Persian Gulf across Persia, or modern-day Iran, to the Caspian Sea, where it connected with the Soviet rail network.

The third route ran from U.S. and Canadian West Coast ports across the North Pacific to Vladivostok. Pursuant to the Soviet-Japanese neutrality agreement, Soviet ships could carry only non-military goods and supplies.

During the war, Soviet freighters would routinely pull into West Coast ports to load Lend-Lease supplies. The Japanese military honored the neutrality agreement and did not attack any of the Soviet freighters crossing the Pacific.

Convoys assembled primarily in Hvalfjörour, Iceland, and at Loch Ewe in Scotland. Icelandic convoys carried the designation PQ on the outbound voyage and QP on the return voyage. British convoys were designated JW on the outbound leg and RA on the return leg. They were supported by the U.S., Canadian and British navies. From 1943 on, escort carriers were also added to provide air cover to protect the convoys.

A total of 1,400 individual trips were made by approximately 400 cargo ships, 85 of which were sunk. Sixteen Royal Navy ships, including two cruisers, six destroyers and eight corvettes, were also sunk.

Although winter conditions were incredibly harsh, it was safer than the summer. The long Arctic night and frequent bad weather prevented German reconnaissance aircraft in Norway from operating in winter.

Seamen were required to wear survival suits when working on deck. In practice, the survival suits were impractical and were rarely worn. If a ship was torpedoed, there usually wasn’t enough time to put one on. In winter, without a survival suit, life expectancy in the frigid waters was less than two minutes. In summer, it was only slightly better.

One of the most notable Arctic convoys was PQ-17. It suffered the worst loss of any convoy in WWII: 24 of 35 ships were sunk between Spitsbergen and Novaya Zemlya.

The most significant naval engagement involving the Arctic convoys was the Battle of the Barents Sea between the Kriegsmarine and the Royal Navy.

The Germans attempted to interdict JW-14, a 14-ship convoy sailing for Murmansk. The ships were carrying 202 tanks, 87 fighters, 33 bombers, 2,046 other vehicles and 80 tons of supplies, including 25 tons of fuel.

The Royal Navy had six destroyers plus additional corvettes escorting the convoy. In addition, two cruisers and two destroyers were on permanent station in the Barents Sea.

The Kriegsmarine force, based in Altafjord, had two heavy cruisers and six destroyers. Although both sides had the same number of ships, the German fleet had considerably more firepower.

The battle was fought during the Arctic night. Although the Royal Navy was outgunned, the German forces proved ineffective, and little damage was inflicted. After the Battle of the Barents Sea, Hitler ordered the surface ships to stay in port and relied on submarines to interdict the convoys.

The last major conflict was the Battle of North Cape, fought on Dec. 26, 1943. This was the last naval battle between big-gun capital ships fought in European waters.

The Admiralty had staggered the schedules of JW-55B, outbound to Russia, and RA 55A, returning to the U.K., to cross in the Barents Sea between North Cape and Bear Island. The British believed that the opportunity to attack two convoys simultaneously was too good a target for the Kriegsmarine to pass up.

The Battle of North Cape was the last naval battle between surface ships, although the convoys continued to be attacked by German submarines and bombers stationed in Norway for the duration of the war.

The Arctic convoys were one of the three routes used by the Allies to provide aid to the Soviet Union during World War II. It was the principal avenue by which Great Britain supplied the Soviet Union, and was instrumental in providing heavy tanks to Soviet forces in the critical period from July to December 1941. The route also played a major role in supplying food to Leningrad during its two-year long siege. While considered a minor theater of WWII, its operations had far-reaching consequences on the outcome of the war.