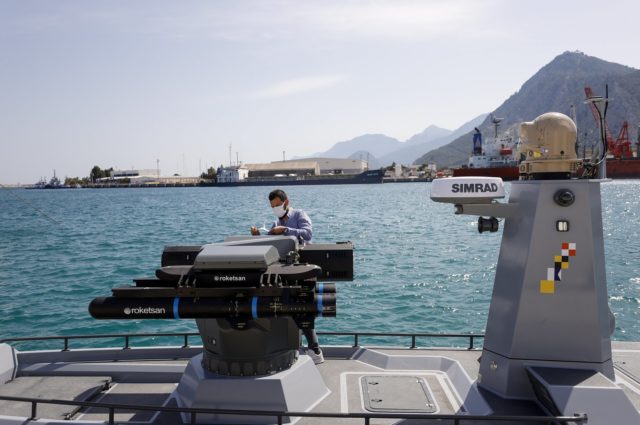 The battle-proven success of Turkish defence products eliminates any hesitation about their quality and operational strength, paving the way for sales abroad, the head of the top defence industry body in the country said Sunday, Defence.az reports citing Daily Sabah.

Turkey has ambitious targets regarding those exports, Demir pointed out and explained the targets to be achieved.

He said Turkey’s first armored unmanned surface vessel (AUSV) is one of the most successful examples of where the local defence industry stands today. It recently took the first step by hitting a target with pinpoint accuracy in a military drill.

The marine craft was the first such vehicle produced as part of the ULAQ project, carried out jointly by Ares Shipyard and Ankara-based Meteksan Defence Industry Inc.

The unmanned vessel hit the target on May 27, in its first firing conducted as part of the Sea Wolf (Denizkurdu) 2021 military exercise, which was conducted simultaneously by the Turkish navy in the Eastern Mediterranean and the Aegean Sea.

“Field successes of our products play a very important role in their sales,” Demir said.

The manufacturing, launch and test firing of the AUSV came at a time when the Turkish defence industry has already made headlines thanks to the success of its unmanned combat aerial vehicles (UCAV), lauded by experts for changing the course of modern military warfare.

Prominent American political scientist, political economist and writer, Francis Fukuyama, for instance, wrote that the made-in-Turkey combat drones and their technology, previously held by just a few countries, namely the United States and Israel, has now elevated Turkey to a position where it has become a major broker and exporter of the technologies, allowing Ankara to have a say in regional politics.

The export of such drones that successfully picked and hunted armored vehicles and air defence systems in Syria, Libya and Nagorno Karabakh, signaled that the country may attain similar successes with its other unmanned platforms, such as the latest AUSV.

The combat drones, namely the Bayraktar TB2 (Tactical Block 2) UCAV of Baykar and Anka medium-altitude long-endurance (MALE) UCAV of Turkish Aerospace Industries (TAI) both are currently under the spotlight.

The first was operated in Azerbaijan, Ukraine, Syria and Libya either by the Turkish Armed Forces (TSK), or purchasing countries. It was also procured by Qatar. The producer most recently signed a new export agreement with Poland.

Anka, on the other hand, will soon be exported to Tunisia for the first time.

Demir pointed out that Bayraktar TB2 UCAVs will fly in the skies of Poland after Ukraine, Qatar and Azerbaijan, underlining the importance of selling these products to a European Union and NATO member country.

He further stressed that Poland made this purchase by conducting an unbiased evaluation and after considering the historical relations between the two countries.

It is also worth mentioning that the purchase was very fast, Demir said.

“The time between the beginning of our contacts and the purchase was very short. This showed how closely they had been monitoring us, had knowledge about the products and acted without prejudice,” the SSB head said, as “there is no longer any room for hesitation about the quality and operational strength of our products.”

“We would like to thank them both for their friendship and willpower toward Turkey. They will see that this step has made a huge contribution to them,” he added.

Demir noted that Turkey’s cooperation models in the defence industry are “open, friendly and based on the goodwill that no other country can offer.”