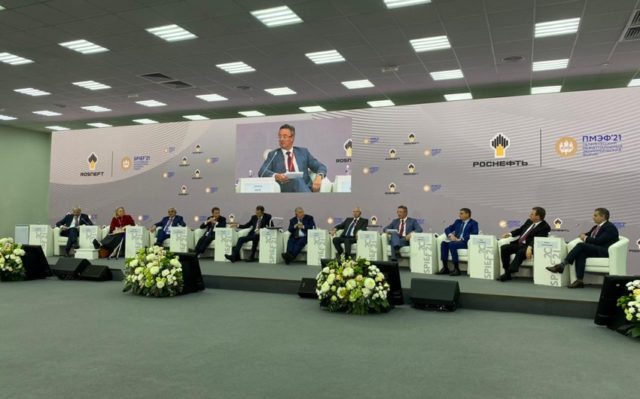 SOCAR President spoke about the prospects of Azerbaijan’s oil and gas industry during the energy transition. He noted that Azerbaijan takes the problem of climate change seriously:

«The consequences of this change are apparent. That is why in April 2016, Azerbaijan signed the Paris Agreement, committing itself to a 35% reduction in greenhouse gas emissions by 2030 compared to 1990. To date, a 30% reduction has been achieved.»

Abdullayev stressed that Azerbaijan is a strategic partner of the world energy market: «At present, our country accounts for 4% of oil imported by the European Union. In addition to producing 40 billion cubic meters of gas a year, we are implementing large-scale gasification projects both in Azerbaijan and abroad. Since 2005, SOCAR has increased the level of gasification in Azerbaijan from 55% to 96% and in Georgia from 40% to 82%. This prevented the burning of millions of tons of fuel oil.

«With the Southern Gas Corridor commissioning, gas began to be exported to Southeast Europe, including countries that still use coal as an energy carrier. During the transition to a clean economy, the use of natural gas still seems inevitable. Of course, we are well aware that the demand for traditional energy sources will decrease over time. But this will not happen in an instant.»

The President of SOCAR emphasized the importance of reducing greenhouse gas emissions by increasing energy efficiency along the entire value chain during the transition period. He cited, for example, the company’s UN-award-winning measures to achieve a complete cessation of associated gas emissions by 2022, carbon capture and injection into discharged oil and gas fields, as well as future green hydrogen production and Showed transportation projects through the Southern Gas Corridor.

Abdullayev noted that SOCAR is consistently diversifying its business and moving towards low-hydrocarbon destinations and intends to continue this vector in the future. It will allow the company to transform and maintain its competitiveness under new conditions.

The St. Petersburg International Economic Forum has been held since 1997 and in recent decades has become an influential discussion platform with the participation of the world’s leading business representatives. This year the forum took place on June 2-5. The main topics of the conference are the world and Russian economy, social issues, and technology.