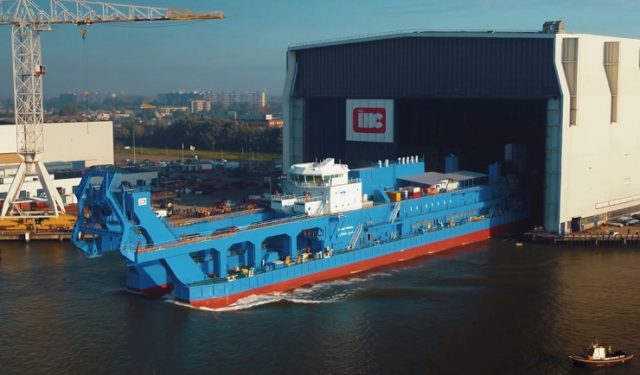 The transport collapse that occurred on March 23 in the Suez Canal due to the gigantic container ship Ever Given, which was partially repeated on April 6, as well as the terrorist actions of Israel, which undermines Iranian ships in the Red Sea with naval mines , are forcing the world community to actively seek a possible alternative to this international sea transport artery.

Against the background of an active discussion of the fastest use of the Northern Sea Route for the transportation of goods between Asia and Europe , Egypt and Israel joined in the search for a solution to the problems of the Suez Canal.

According to the President of the Arab Republic of Egypt Abdel Fattah el-Sisi, the authorities of this country are working on a “land connection” of the Red and Mediterranean Seas through a network of ports and railways. We are also working on the implementation of many plans for the development of various regions of the country, including the port of El-Arish.

At the same time, the administration of the Suez Canal is considering the possibility of expanding its channel. At the same time, it became known that recently the fleet of the Suez Canal administration was replenished with the largest dredging vessel in the Middle East – “Mohab Mamish”, named after the former commander of the Egyptian Navy, Vice Admiral Mohab Mamish, who headed the administration of the canal until 2019. Another vessel of the same type, the Hussein Tantawy, will be received by the canal administration in August 2021. The construction of two dredging ships cost 300 million euros. The mission of these ships will be to maintain a constant channel depth of 24 meters, and provide assistance, if necessary, in emergencies such as that occurred in March, when traffic was stopped by a container ship hitting the shore.

In addition to deepening / clearing the Suez Canal, its administration is considering expanding its channel, as Chief of Staff Osama Rabia recently told CNN Arabic in an interview. According to him, the need for such actions was demonstrated by the recent incident with the container ship Ever Given and they are considered as an opportunity to avoid a repetition of the situation with the container ships.

Earlier, Egyptian President Abdel Fattah al-Sisi already spoke about the need to equip the technical services of the channel with more powerful means and purchase new dredgers and tugs – the cost of such a purchase could be about half a billion dollars.

To the planned measures of the Egyptian authorities, it must be added that in 2015, a new channel of the Suez Canal was created parallel to the main channel, the length of which is 72 kilometers. Its appearance contributed to the acceleration of the process of passage of ships in both directions. But the problem is that the new channel is a duplicate only in the northern part of the canal, the rest of the section is still one-way traffic.

Israel has recently actively joined in the search for a solution on the Suez Canal, where they remembered the idea of ​​the Ben-Gurion Canal, which could connect the Mediterranean with the Red Sea bypassing the Suez Canal. At the same time, the Israeli authorities argue that the distance between Eilat, which has access to the Red Sea through the Gulf of Aqaba, and the Mediterranean is comparable to the length of the Suez Canal fairway, and therefore the Ben-Gurion Canal may well assume the role of a “backup” for the Suez Canal. which, as a result of a recent incident, robbed a huge number of companies around the world of profits. However, they do not forget that previous attempts to realize this grandiose Israeli construction project failed.

The Ben-Gurion Channel project has a long history. It was developed after the decision in 1956 by then Egyptian President Gamal Abdel Nasser to nationalize the Suez Canal, previously owned by France and Great Britain. Former Israeli Prime Minister Shimon Peres recalled this project in his book “New Middle East” , published in the late 90s.

As stated in the explanatory note to the project, the Israeli canal was supposed to be dug through the Negev desert, from Eilat to the north – between the two mountains and further to the Mediterranean Sea. In addition to the extremely high cost of the project, it was proposed to use 520 nuclear bombs during excavation work. However, in the end, the project was frozen: nuclear explosions would cause an increase in the radiation background, and conventional construction simply became unprofitable. In addition, the authors of the project explained that the Arab countries surrounding Israel will strongly oppose the construction of an alternative Suez Canal.

Tel Aviv today promises to build the Ben Gurion Canal in five years and turn the new transport artery into a multi-faceted project that will include the construction of small towns with hotels, restaurants and nightclubs along the fairway. However, investors are pessimistic about the Ben-Gurion Channel, primarily due to the fact that incidents like the one that occurred on March 23 in the Suez Canal are not so frequent. In addition, the need to use nuclear bombs to reduce the cost of excavation reinforces these doubts.

The very plans of Tel Aviv to revive the Ben-Gurion Canal project have already aroused caution in Cairo, primarily because of the fear of losing part of the profits from the Suez Canal, which brings in about $ 6 billion a year. Under these conditions, Egyptian President Abdel Fattah el-Sisi even reminded the public that the Suez Canal has played an important role in world trade for 160 years.

In addition to the Ben-Gurion channel, Israel is willing to propose another alternative project – “The Path to Regional Peace” , which was presented by Israeli Transport Minister Israel Katz at a conference in the Sultanate of Oman in early November 2018. This project was announced by the Israeli authorities after construction. a railway line from the port of Haifa to Beit She’an, which was officially opened in 2016, with the idea of ​​connecting the port city of Haifa on the Mediterranean coast through Jordan with Saudi Arabia and other Sunni states on the Arabian Peninsula. This 2,200 km rail network has been named an alternative route for air and sea routes and bypasses the Hormuz and Bab al-Mandeb straits, through which nearly 90% of Gulf oil and gas exports pass. At that time, this project looked dubious due to the tense relations between Israelis and Arabs, however, after the appearance in 2020 of the “Abraham Treaty” (an agreement on the normalization of relations between a number of Arab countries with Israel), the reality of its implementation resounded in the statements of Israeli representatives.

In addition, as a regional alternative to the Suez Canal, negotiations have resumed for oil exports from the Persian Gulf to Europe, the Tapline Trans-Arabian Pipeline, which connects Saudi Al-Qaisumah with Lebanese Sidon. Its construction began in 1947 and in 1950 the first pumping over it took place. Its length was 1,214 kilometers with an initial throughput of 300 thousand barrels per day, and then an increase to 500 thousand barrels after adding several pumping stations. But Israel destroyed a section of the Tapline pipeline in the Golan Heights in 1967, after which it ceased to function and is currently unusable, although Riyadh did register Tapline in December 2020 as an industrial heritage site.

According to Egyptian experts, this Tapline project will not be able to seriously harm Egyptian interests, since supertankers have long been used in the oil industry, with the advent of which the economic feasibility of such an oil pipeline has disappeared.