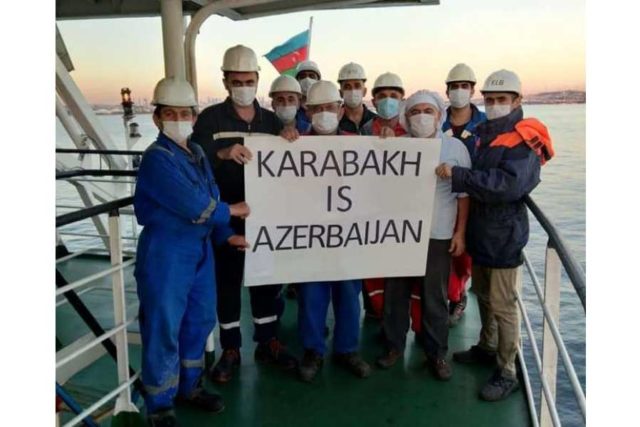 The mariners sailing on the vessels of the Azerbaijan Caspian Shipping Company (ASCO), operated in external waters under the tricolor flag of our country, have shown support for the just cause of Azerbaijan and the decisive struggle of our National Army.

The sailors took a picture on board of their ships with a poster displaying the words of President Ilham Aliyev stating that “Karabakh is Azerbaijan and an exclamation mark” and shared these photos on social networks using the hashtags #Karabakh #AllForKarabakh #KarabakhIsAzerbaijan.

The sailors working away from their homeland have thus demonstrated that they oppose the lies and aggressive policies of Armenia, and that Karabakh belongs to Azerbaijan.

We emphasize once again that the Azerbaijani sailors, regardless of the waters where they sail, have always been rallied around the Supreme Commander-in-Chief Ilham Aliyev. Selfless sailors are proud of our National Army and wish our people continuous joy of victory.