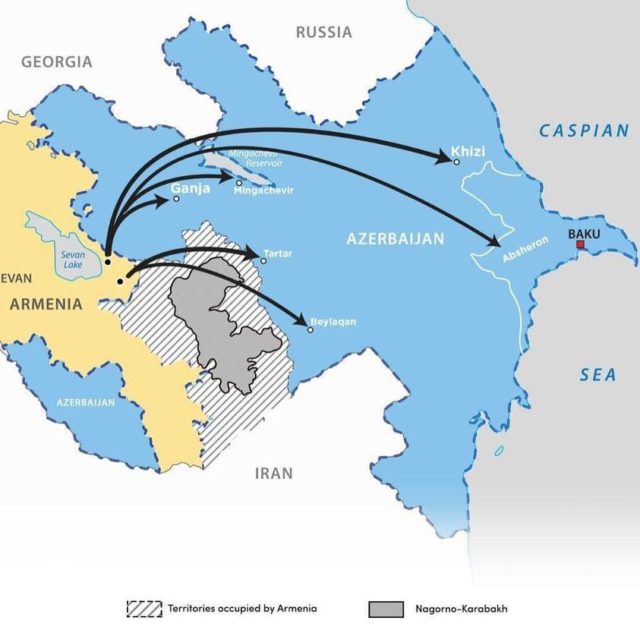 Chairman of the Board of the Azerbaijani Center for International Relations Analysis Farid Shafiyev shared on his Twitter account a map showing the missile attacks of Armenia on various territories of Azerbaijan, Trend reports on October 5.

Shafiyev noted that the shelling of civilian infrastructure from the territory of Armenia, including strategic water supplies, is actions that can lead to the death of people, they contradict the Geneva Convention.

“Armenia is aimed at expanding provocations and involving third parties in the conflict,” he added.

Azerbaijan responded with a counter-offensive along the entire front. As a result of retaliation, Azerbaijani troops liberated a number of territories previously occupied by Armenia, as well as take important, strategic heights under control.

The fighting continued into October 2020, in the early days of which Armenia has launched missile attacks on Azerbaijani cities of Ganja, Mingachevir, Khizi as well as Absheron district.

The conflict between the two South Caucasus countries began in 1988 when Armenia made territorial claims against Azerbaijan. As a result of the ensuing war, Armenian armed forces occupied 20 percent of Azerbaijan, including the Nagorno-Karabakh region and seven surrounding districts.

The 1994 ceasefire agreement was followed by peace negotiations. Armenia has not yet implemented four UN Security Council resolutions on the withdrawal of its armed forces from Nagorno Karabakh and the surrounding districts.