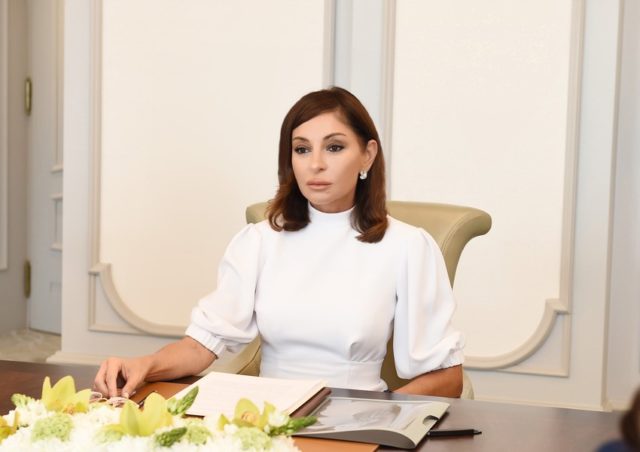 Mehriban Aliyeva was born in Baku. Mehriban Aliyeva graduated from secondary public school No. 23 in Baku in 1982 with a gold medal, and later entered the Nariman Narimanov Azerbaijan State Medical University. She continued her studies at the I.M.Sechenov First Moscow State Medical University from where she graduated with an honorary diploma in 1988. She worked at the Moscow Scientific Research Institute for Eye Diseases under the leadership of academician Krasnov in 1988-1992.

These projects are not limited to Azerbaijan. Humanitarian projects implemented by Mehriban Aliyeva are famous all over the world. A new school for girls were built in Pakistan, and a series of humanitarian campaigns were held in Islamabad, as well as in other provinces of Pakistan at her initiative. The restoration of a part of the Palace of Versailles and a medieval church in Strasbourg, one of the galleries of the Louvre Museum, Roman catacombs, construction of the Azerbaijan-Russia friendship bridge in Astrakhan are among the charity works of the Heydar Aliyev Foundation.

On August 13, 2004, Mehriban Aliyeva became a designated UNESCO Goodwill Ambassador for promoting national literature and the musical heritage of Azerbaijan.

On December 28, 2004, Mehriban Aliyeva was elected a member to the Executive Committee of the National Olympic Committee of the Republic of Azerbaijan at the 4th General Assembly of the Organization.

She was also awarded the title of ‘Woman of the Year’ in 2005 according to the social poll held in Azerbaijan.

On June 9, 2005, the first lady of Azerbaijan was awarded the order of the ‘Ruby Cross’ from the International Charitable Foundation ‘Maecenas of the Century’ for her public support and charity activities, considerable contribution to the support of educational and cultural institutions and strengthening friendships between the peoples of Russia and Azerbaijan.

Mehriban Aliyeva received a PhD in Philosophy in 2005.

On November 24, 2006, she was conferred with the title of ISESCO (Islamic Educational, Scientific and Cultural Organization) Goodwill Ambassador for extensive and selfless activity in various fields, including intercultural dialogue, attention to children in need of special care and support for improving living conditions, great support for education and projects being realized in the Islamic world.

The World Health Organization (WHO) awarded Mehriban Aliyeva for her exceptional services in protecting and strengthening the health of the mother, child and family. This was made upon a unanimous decision of the 120th session of the WHO executive committee in Geneva on January 29, 2007.

Mehriban Aliyeva was honored with ‘Gold Heart’ international award in 2007 for her charitable activities and the outstanding achievements in services to the highest ideals of humanity.

The first lady was awarded the ‘Grand Commander’s Cross of the Order of Merit of the Republic of Poland’ on September 14, 2009. She received this Order for her contribution to the development of friendly ties between Azerbaijan and Poland.

Mehriban Aliyeva was awarded the ‘Order of Legion of Honor’ by French president’s order dated February 10, 2010.

She was honored with the title of Honorary Professor of the Russian Federation’s I.M. Sechenov First Moscow State Medical University on February 13, 2012.

Mehriban Aliyeva was elected the Deputy chairperson of the ruling New Azerbaijan Party at the fifth meeting of the party on June 7, 2013. Mehriban Aliyeva was honored with Pakistani ‘Shaheed Benazir Bhutto Women Excellence Award 2013’ on December 27, 2013.

The first lady was awarded an honorary prize of the Turkish-German Friendship Federation on May 12, 2014, for her contributions to dialogue between civilizations, as well as for the services towards promotion of the Turkic world in Germany and development of relations between Azerbaijan and Germany.

On August 9, 2019,  Mehriban Aliyeva has been awarded the Order of Friendship of the Russian Federation by President Vladimir Putin`s Decree. Mehriban Aliyeva was honored for her contributions to the development and strengthening of the Azerbaijan-Russia relations.

The work of Mehriban Aliyeva as chair of the Organizing Committees of the I European Games held in Azerbaijan, as well as the IV Islamic Solidarity Games was highly appreciated by the international community.

By the Decree of President Ilham Aliyev dated February 21, 2017, Mehriban Aliyeva has been appointed First Vice President of Azerbaijan.

As First Vice President, Mehriban Aliyeva focuses on addressing social issues and problems of disadvantaged groups of people. The care of the families of martyrs, war invalids, IDPs, children with disabilities and low-income families is always in the center of attention.

Mehriban Aliyeva is married, has two daughters, a son.