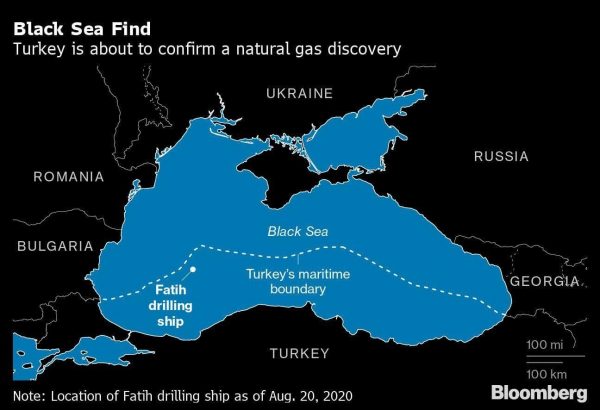 Russian Gazprom began to lose ground in the Turkish market even before Turkey opened its first large gas field of its own.

According to the newspaper, Gazprom is unlikely to lose this market in the future, however, depending on the effectiveness of the development, significant adjustments will be made in the volume of purchases.

The country is completely dependent on gas imports. Until last year, Russia was the largest supplier of raw materials to the country. The supplies went through the Blue Stream gas pipelines (capacity 16 bcm per year) and the Turkish Stream launched on January 8, 2020 with a design capacity of 31.5 bcmof gas per year, half of which goes to the Turkish market, and the second half to the south of Europe.

At its peak in 2017, exports from Russia to Turkey reached almost 30 bcm of gas, the country being the second largest consumer of Gazprom after Germany. But in 2019, Turkey cut purchases by 35%, to 15.5 bcm, which became an anti-record since 2004. In the first half of 2020, the demand for Russian gas fell 1.7 times to 4.7 bcm. At the same time, Turkey increased its purchases of liquefied gas (in May, imports of liquefied gas exceeded pipeline volumes), as well as pipeline raw materials from Azerbaijan. The latter has become the leader in gas supplies to the Turkish market since March 2020.

It should be noted that in 2021 Gazprom will expire a contract with the Turkish monopoly Botas for the supply of 4 bcm of gas per year (the purchase for the rest of the volumes was concluded with private companies), and in 2025 – for 16 bcm.

According to Dmitry Marinchenko from Fitch, the field, judging by the estimated reserves, is indeed very large and, in theory, could help Turkey to significantly reduce the volume of imported gas. In this case, purchases in Russia may fall to zero, the expert believes. He notes that the work on assessing the investments required for the implementation of the project has yet to be done and it is too early to talk about profitability. But the development of own reserves, as a rule, allows to reduce the cost of gas for domestic consumers, and also has a positive effect on the trade balance and the stability of the national currency, says Mr. Marinchenko.

In his opinion, for Russia in this context, it is becoming more important to build a gas infrastructure in Europe, allowing it to receive gas from the Turkish Stream.

Gazprom is not commenting on the situation. But a source familiar with the situation believes that it is too early for the monopoly to be scared: “Turkey’s consumption is actively growing, and the reserves still need to be economically extracted.”

Ekaterina Kolbikova, consultant at VYGON Consulting, in turn, notes that the Turkish government’s intention to commission the field in less than three years sounds extremely ambitious.

Wood McKenzie, commenting on the event, noted that this is the largest discovery in the history of Turkey in terms of declared reserves.

In addition, it confirms the potential of deep water projects in the Black Sea after several failed wells in Bulgaria, Wood Mac notes in a comment.

“However, regardless of the political and economic importance, the receipt of products will be difficult and 2023 for the opening, named Sakarya, looks ambitious,” the consulting company noted.

Deepwater projects are always difficult, and the Black Sea creates additional logistical problems that brought the Romaniangreat project Neptune Deep to a halt, which is just 100 km from the Tuna-1 well.

Wood Mac’s European Gas Director Murray Douglas noted that “in the 2020s, this discovery could have far-reaching implications for future gas imports and upcoming negotiations with suppliers – Gazprom, Azerbaijan and Iran.”