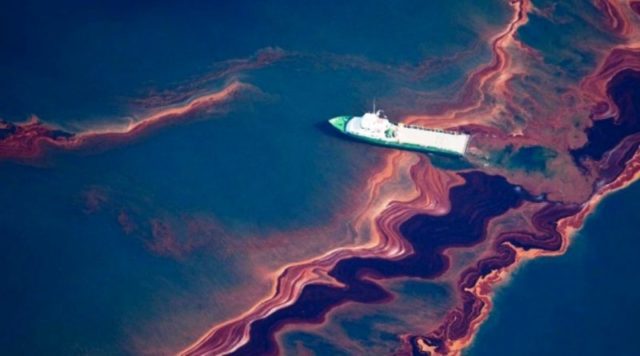 On June 21, it became known that fuel flowed from the Delfi tanker that sank off the coast of Odessa in November 2019. On June 22, the stain increased, but the regional prosecutor’s office and city council said that its origin is natural.

On June 23, Odessa City Council deputy Alexander Zakharov posted on Facebook photos of spots similar to traces of petroleum products arising from the Delfi tanker that sank in Odessa.

As can be seen in the pictures, the stain spreads towards the Langeron beach. According to preliminary results of water sampling, it is not a train of oil products, the press service of the prosecutor’s office in Odessa region said.

“Damage to protective booms and the fact of a possible release of oil products from the sunken tanker Delfi has not been established, no visual traces of pollutants on the coast were found, the water in the coastal area is clear. Using a quadrocopter, the presence of darkening of water, which is a train of natural origin, was established, ”the prosecutor’s office said after leaving the ship’s wreck.

In a commentary made public by Dumskaya on Telegram, Acting Director of the Department of Ecology and Development of Recreational Areas of Odessa Valentina Datsyuk said: “With the help of the drone, we saw a certain spot. To say that it [consists of] oil-containing products, or is it a natural trail – you see, there is excitement at sea, is premature. ”

According to her, “at the spot definition points” samples were taken, according to the results of which it will become known what kind of pollution is involved.The fact that fuel is pouring out of a sunken tanker was announced on June 21. The reason in the regional state administration called damage to the booms. They, according to the RSA, were restored on the same day.

The Delfi tanker sank near the beach in Odessa during a storm in November 2019. On the evening of November 20, due to bad weather, the tanker was anchored. They tried to tow him, but because of the storm they could not do this. Delfi slowly drifted near the Dolphin beach until it ran aground. He rolled over, the ship sank.

Three sailors from the tanker are citizens of Ukraine, they were evacuated on November 22. According to media reports, the tanker Delfi could be involved in smuggling oil. After the shipwreck, the content of oil products in this water area became 157 times higher than the norm.

Militiamen opened criminal proceedings on the accident of the tanker Delf