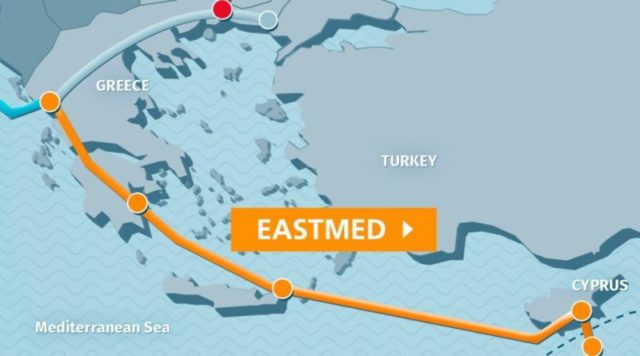 Following the visit of the Prime Minister of Greece K. Mitsotakis to Israel and his meeting with B. Netanyahu, a corresponding declaration was signed on closer energy cooperation between the countries.

Jerusalem, June 17 – IA Neftegaz.RU. Greece and Israel have confirmed their support for the East Mediterranean EastMed gas pipeline project, as well as the Greece-Crete-Cyprus-Israel electrical connection.
This was reported by the Ministry of Energy of Greece.

Following a visit  on June 16, 2020 , Greek Prime Minister K. Mitsotakis to Israel and his meeting with B. Netanyahu, a corresponding declaration was signed on closer energy cooperation between the countries.
The document was signed by Greek Energy Minister K. Hadzidakis and Israeli Energy Minister J. Steinitz.

The declaration states on cooperation in the energy sector within the framework of the promotion of joint projects that strengthen the energy security of 2 x countries.
K. and Y. Steinitz Hadzidakis reaffirmed their strong support for Greece and Israel EastMed realization of the gas pipeline, which is a viable and strategic choice of common interest not only for the 2 x countries, but also for the European Union.
The Israeli side began the process of ratification of the Greek-Cypriot-Israeli intergovernmental agreement, signed on January 2, 2020.
Greece ratified the agreement on May 14, 2020 .

Ministers emphasized the importance of the Greece-Crete-Cyprus-Israel electrical connection, which is being implemented as part of a joint interest project by EuroAsia Interconnector, and submitted an application for financing the project from Connect Europe Facility on May 27, 2020.
The agenda also included deepening 3-way Greece-Cyprus-Israel cooperation as part of the 3 + 1 initiative (which includes the United States) as well as the EastMed Gas forum.
The possibility of expanding the forum to the permanent organization of energy cooperation in the Eastern Mediterranean was discussed.

The Joint Declaration also speaks about the prospects for investment and the exchange of know-how in the areas of renewable energy ( RES ), electrification, energy storage and energy efficiency, alternative fuels.

The EastMed trunk gas pipeline ( IHP ) is to ensure the supply of energy from the Eastern Mediterranean through about. Crete to mainland Greece, from where gas is supposed to be delivered via the Poseidon subsea gas pipeline to Italy and via the IGI interconnector gas pipeline   between Greece and Bulgaria to other European countries.
In  2017 g of . EU and Israel authorities agree to implement the IHP EastMed project before IHP IGI.
In December  2017  , Cyprus, Greece, Italy, and Israel signed a non-binding memorandum of understanding (MOU) to support the construction of the East Med IHL.

The interstate agreement of Greece, Israel and Cyprus on the construction of EastMed was signed  on January 2, 2020  in Athens.
The document was signed by the Minister of Environment and Energy of Greece K. Hadzidakis, Minister of Energy of Israel J. Steinitz and Minister of Trade, Industry and Tourism of Cyprus G. Lakkotripis.
The ceremony was attended by Greek Prime Minister K. Mitsotakis, Israeli Prime Minister B. Netanyahu and President of Cyprus N. Anastasiadis.
Then it was said that the procedure for concluding an agreement would be completed when Italy signed it, but this date has not yet been determined.
Despite the fact that the Greek parliament has ratified the agreement, the intrigue in the implementation of the project remains.
There is disagreement in the Italian government over IHL EastMed.
The parties planned to sign this agreement in  February  2019.

The resource base for EastMed will be gas from the Israeli Leviathan field and Cyprus Aphrodite.
Leviathan  (Leviathan) on the shelf of Israel after numerous postponements was started only in  January 2020  city of
IHL EastMed implements IGI Poseidon Project, a joint venture (JV) of the Greek DEPA and Italian Edison.
The length of EastMed will be 1900 km.
Cost – 6-7 billion US dollars (3.2 – 3.7 million US dollars / km).
The throughput capacity is 10 billion m 3 / year of gas with the possibility of increasing to 20 billion m 3 / year.
The construction period is 7 years.

The project received US support.
EastMed may become another competitor to Gazprom’s export gas pipelines, whose gas exports to Europe are  already declining .
Turkey also opposes the project, which believes that it ignores the rights of Turkey and Turkish Cypriots to natural resources in the eastern Mediterranean Sea.
In addition, Lebanon also has a claim to the project, which  believes that EastMed IHL could violate its maritime borders, which could create a hotbed of instability in its territorial waters.