The new well was commissioned without incident, on budget and on schedule.Wintershall Noordzee BV, a joint venture between  Wintershall  Dea  and Gazprom EP International, has successfully started gas production at the 2nd production well D12 – B2 at the Sillimanite field in the Netherlands, which it operates.
This was announced by Gazprom EP International.Wintershall Noordzee start drilling 2 nd operational wells sillimanite at the beginning of February 2020
Shortly after that, the world was faced with difficulties caused by the coronavirus pandemic.
No one could have foreseen the consequences of the outbreak of COVID-19.
However, quickly adapting to the new reality, Wintershall Noordzee was able, thanks to hard work, to put the new well into operation without incident, on budget and on schedule.

The Sillimanite gas field, discovered in 2015 and commissioned in early 2020 , has a unique feature: it is located on the maritime border of the Netherlands and the UK and, therefore, is a truly European project.
Before starting the development of Sillimanite, an agreement was required between the UK and the Netherlands.

Production has begun according to the planned schedule – according to the results of drilling.
The well not only meets optimistic forecasts, but also perfectly complements the 1st well in the Sillimanit field.
Production is in line with expected performance.
The Sillimanite South exploration well, which should be drilled in the summer, offers further gas production if successful and can be turned on until the end of 2020.

Gas produced at well B2 will also be transported through a new 12-kilometer gas pipeline connecting the D12-B offshore platform with an existing production platform (operated by Neptune) in the Netherlands territorial waters.
From there, through NGT (Noordgastransport BV) gas will flow to the onshore gas transmission network ( GTS ).

Wintershall Noordzee has further plans for developing a gas field.
The success of Sillimanite prompted the company to move on to drilling the Sillimanite-South exploration well, which is currently under development.
If all goes according to plan, 3 I well allow feed more gas into the export pipeline already in the 4 th quarter of 2020

However, Wintershall Noordzee faced a more difficult environment in the southern part of the North Sea, and prospecting ( exploration ) moving a record low rate.
In order to continue successful work in the Dutch upstream sector, a more favorable investment climate will be crucial.
This requires an improvement in the basic conditions to stimulate and support the continuation of exploration, development and expansion of the infrastructure necessary for energy transport. 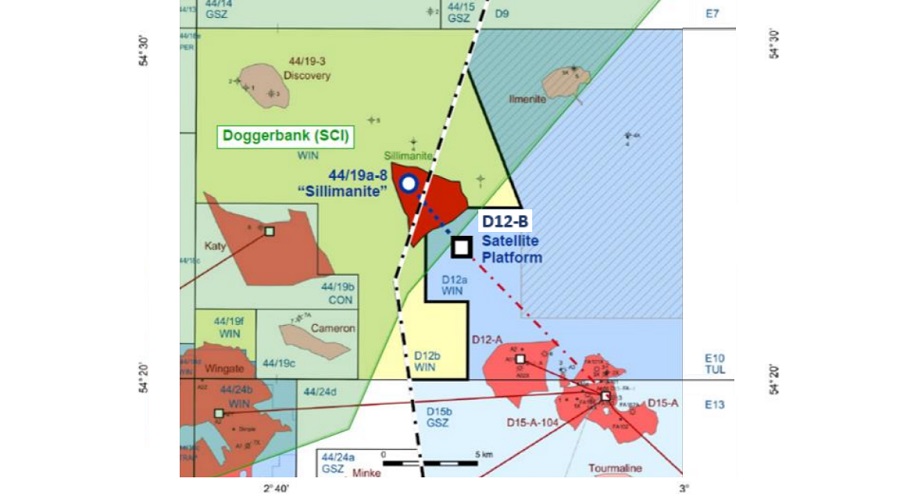 The Sillimanite deposit was discovered in the southern part of the  North Sea  in 2015.
It is located offshore about 200 km from Den Helder.

To equip the field, they used the upper structure, previously installed on the E18-A platform, and even earlier – on P14-A.
Wintershall installed a superstructure from E18-A to the D12-B offshore platform in block D12-A in the Dutch sector.
Platform – D12-B satellite operates in automatic mode, without crew.
Gas is transported via a 12-kilometer gas pipeline Ø25.4 cm (10 inches) to the main offshore platform ( MP ) D15-FA-1, operated by Neptune.
From here, the produced gas is transported via the NGT gas pipeline (Noordgastransport) to the shore.
Wintershall Noordzee has contracted a Maersk Resolve Self-Lifting Drilling Rig ( SPB ) for drilling at least 2 production wells.

Gazprom and Wintershall became partners in the Wintershall Noordzee joint venture (JV) in 2015.
This happened as a result of an asset swap transaction.
In exchange, the German company received shares in a project to develop sections 4A and 5A of the Achimov deposits of the Urengoy field.
Gazprom has also taken full control of Wingas, a European gas storage joint venture astora.