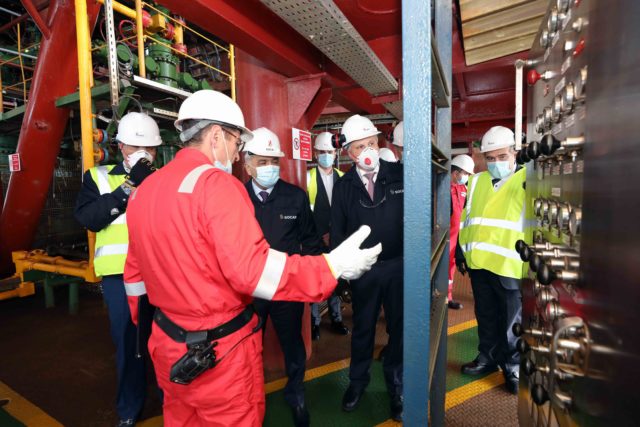 On May 5, President of SOCAR Rovnag Abdullayev visited the Umid-1 platform in the Umid field, got familiarized with the capital repair and reconstruction works, and started drilling of a new well, Report informs, citing SOCAR.

Two more wells would be drilled in the Umid-1 platform to accelerate production in the Umid field. The platform reconstructed in connection with the drilling of new wells; its production capacity increased, gas production will increase from 2.4 mln to 6.6 mln cubic meters/day. An automatized fire-extinguishing system, digital control, and video surveillance systems have been installed on the platform to tighten the security measures.

The preparatory works for the drilling of the well started in May 2019. The whole drilling works will be carried out by Umid Babek Operation Company (UBOC) for the first time.

In November 2010, the giant Umid Gas-Condensate field discovered. It is the first field found by SOCAR with its resources after the Republic of Azerbaijan gained its independence. The field put into operation in 2012. It is situated in the South Caspian Sea, off the coast of Azerbaijan, approximately 40 kilometers southeast of Baku. The field has produced 3.4 billion cubic meters of gas and 540,000 tonnes of condensate so far. Currently, three wells are exploited from one platform in the field.

In the future, it is planned to build the Umid-2 platform in the Umid field, to conduct exploration and drilling works in Babek structure. Dashgil-2 terminal with an annual capacity of 24 million cubic meters constructed for the first refinery of the gas and condensate to be produced from the Umid-Babek block. The product will be delivered to the terminal via a subsea pipeline. Construction of the terminal, which commenced in September 2019, is underway. The outcome from an exploratory well to be drilled in Babek structure is planned to be carried to the Umid-1 platform via pipeline, then to Dashgil-2 terminal via subsea line.