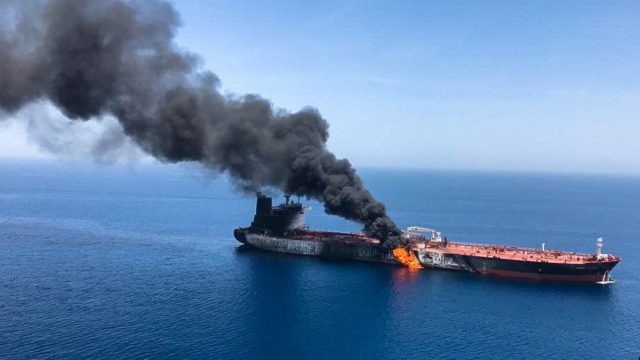 Crew members of Frontline’s oil tanker Front Altair, one of two vessels attacked this week in the Gulf of Oman, have landed in Dubai, the Norwegian ship’s operator said on Saturday, Trend reports citing Reuters.

“All 23 crew members of the tanker departed Iran, from Bandar Abbas airport, and landed at Dubai International Airport at 1830 CET this afternoon,” a statement said.

A Frontline spokesman told Reuters that the crew, of Russian, Filipino and Georgian nationalities, were well-looked after by Iranian authorities. Most flew home straight after arrival to Dubai, with the rest to travel on Sunday.

Frontline said a tugboat reached the Front Altair on Saturday afternoon and a specialist team would inspect its condition and damage. The Front Altair caught fire after the attack but the flames were extinguished later.

The United States and Britain have accused Iran of attacking the tankers, but Tehran has denied that.

The attacks have driven up oil prices and fueled concerns about a new U.S.-Iranian confrontation.

The other tanker hit, the Kokuka Courageous, was being towed toward the United Arab Emirates’ port of Kalba, its operator said on Friday.