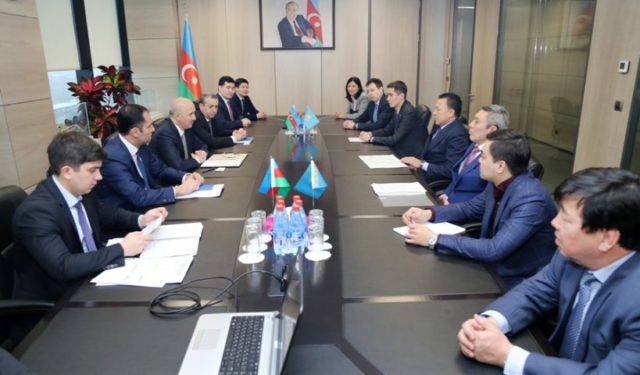 By asco.az The prospects of transport routes transiting through the Caspian Sea and Azerbaijan, including the Trans-Caspian International Transport Route were discussed during the meeting.

ASCO Chairman stressed that thanks to consistent policy followed by President Ilham Aliyev, Azerbaijan turned into a vital transport hub.

Speaking about the fleet which is constantly upgraded, ASCO chairman Rauf Valiyev said that Azerbaijan would continue to follow this strategy in order to meet the increasing volumes of cargo transported via the Caspian Sea.

Sauat Mukhametbayevich Minbayev, Chairman of the Joint Stock Company “Kazakhstan Railways” National Company, in his turn emphasized the strategic role of ASCO in the Trans-Caspian International Transport Route. Visiting Azerbaijan Caspian Shipping Company for the first time in his new capacity, he expressed his confidence that cooperation between the two brotherly and friendly countries would continue to grow in the future.

The sides expressed their consent to further continue the transport, logistics and bilateral cooperation in the format of the working group.

At the end of the meeting, the video presenting the activity of the Azerbaijan Caspian Shipping Company was demonstrated to the guests.