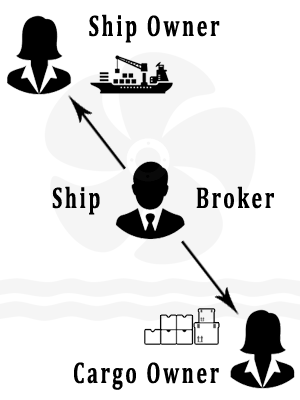 In one of my previous articles, I had posted about a day in the life of a Shipbroker.. Then came some questions from readers about what is the difference between a shipbroker and a ship charterer..

Before we get into the details, let’s cover some definitions

While ship charter happens in all types of cargoes, it is PREDOMINANTLY popular in the Bulk (Dry and Wet) and Breakbulk sectors..

A Ship Charterer plans the details of the voyage, including calculation of cargo handling costs up to the ship and depending on the terms of shipments agreed with the shipowner (such as FLT, FIO etc) arrange shore-based cargo handling equipment where required etc..

Basically, everything that is required to ensure not just the safe loading and discharging of the goods, but also the safety of the ship and its crew by following the best practices in cargo operations..Advertisement

Ship charterers could be any of a diverse group of entities such as commodity traders, oil majors, mining companies and grain houses shipping raw materials such as coal, iron ore, bauxite, grain, phosphate and crude oil to highly refined products such as aviation fuel and petrochemicals..

As per global trade estimates in 2017, more than 10.702 billion tons of cargo were shipped over 58 trillion ton-miles on 50,732 ships across the globe.. Out of this, if we take out the container ships, around 44,000 ships were involved in carrying Oil, Dry Bulk, General Purpose, Gas etc..

You can imagine then, that the cargo owners who have the cargo do not know all the owners of the 44,000 ships that are available to carry their cargo..

While the shipbroker also will not know the owners of all 44,000 ships, there are several shipbrokers and broking companies around the world and it is their job to bring the shipowners and charterers together..

A shipbroker brings the shipowners and charterers together and facilitates the charter..

Once an agreement is reached between the parties as per the charter party, it is called a fixture..

The broker(s) involved in the fixture receives a commission on the gross freight or hire earned by the shipowner..

The commission is usually a percentage of the freight and this is paid by the shipowner to the shipbroker..

A shipbroker maybe part of a shipbroking department in the principal’s own organisation, or part of a separate company within which individual brokers tend to specialise as owner’s or charterer’s brokers..

There can also be an extended ‘chain’ of brokers (occasionally only one) between the two principals..

A ship operator is either the shipowner or the (legal) person responsible for the actual management of the vessel and its crew..

A shipbroker performs several functions and must be aware of the various types of charters involved depending on the cargo type..

The main types of charters are

Time Charter is a contract in which the shipowner hires out the ship to the charterer for a stipulated period of time for a remuneration known as hire, generally a monthly rate per ton deadweight or a daily rate..

The charterer can employ the vessel as she deems fit in terms of the route and cargo but within the terms as agreed, but the shipowner continues to manage his own vessel through the master and crew who remain his servants..

Voyage Charter is a contract in which the shipowner hires out the ship to the charterer for the carriage of an agreed quantity of cargo from a specified port or ports to another port or ports for a remuneration called freight, which is calculated according to the quantity of cargo loaded, or sometimes at a lumpsum freight.. Voyage charter is one of the most common forms of charter..

The shipowner continues to manage his own vessel through the master and crew who remain his servants..

Bareboat Charter is a contract in which the shipowner leases a specific ship and only control its technical management and commercial operations..

There are several processes and complexities involved in the above-mentioned charters both from the perspective of a shipowner and a charterer and a shipbroker must be capable of handling all of these..

Before offering a ship, a shipowner will be interested in finding out

Before fixing a ship, a charterer will be interested in finding out

and many other issues relating to the successful fixture..

A shipbroker can operate in many areas of brokerage such as dry cargo, tanker chartering, ship sale and purchase and also general purpose cargo, but usually, brokers prefer to specialise in one of these areas..

A good shipbroker would have a solid database of contacts and an ear to the ground in the shipping market and knows how to interpret the trends in the market and seek out opportunities for clients..