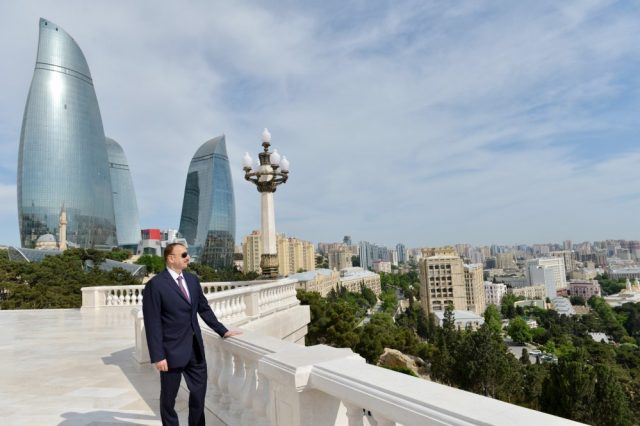 In 1977, he entered the Moscow State University of International Relations (MSUIR).

In 1982, upon his graduation, Mr. Aliyev had continued his education as a postgraduate student in MSUIR.

In 1985, he finalized his research works and received a PhD degree in history.

During the years of 1985-1990, he gave lectures at the Moscow State University of International Relations.

From 1991 to 1994, he led a group of private industrial-commercial enterprises.

In 1994-2003, he was the vice-president, and later the first vice-president of the State Oil Company of the Republic of Azerbaijan (SOCAR). He had been actively involved in the implementation of Heydar Aliyev’s oil strategy.

He is an author of numerous research works on geopolitical aspects of oil strategy of sovereign Azerbaijan. He holds a degree of doctor of political sciences.

In 1995 and 2000, he was twice elected to the Milli Majlis (Parliament) of the Republic of Azerbaijan.

In 2003, he stopped his activity as a Member of Parliament due to his appointment to the post of Prime minister of the Republic of Azerbaijan.

From 2001 to 2003, he was the head of the Azerbaijani Parliamentary delegation to Parliamentary Assembly of Council of Europe (PACE).

In January 2003, he was elected as Deputy-Chairman of Parliamentary Assembly of Council of Europe and member of the PACE bureau.

In August 4 2003, following the approval of the Milli Majlis (Parliament), he was appointed as the Prime minister of the Republic of Azerbaijan.

In October 15, 2003, he was elected as the President of the Republic of Azerbaijan. More than 76% of voters supported Ilham Aliyev’s candidacy during the elections. He assumed his post on 31 October, 2003.

In April of 2004, Mr. Aliyev was awarded a medal and diploma of honorable member of PACE for his active participation in PACE events and commitment to European values.

As a result of the presidential elections, held on October 9, 2013, Ilham Aliyev was re-elected by a majority of voters as a President of the Republic of Azerbaijan. 84.54% of voters supported his candidacy. Ilham Aliyev took office on October 19, 2013.

On April 11, 2018 Ilham Aliyev was re-elected President of the Republic of Azerbaijan winning 86.06% of votes.

Mr. Aliyev is married, has three children and five grandchildren.

The first degree Order of Alexander Nevsky of the Academy of Problems of Security, Defense and Order of the Russian Federation (11 April, 2005)

Heydar Aliyev Order of the Republic of Azerbaijan (28 April, 2005)

“Sheikhulislam” Order of the Caucasus Muslims Board (22 December, 2005)

Grand Cross of the Legion of Honor of the French Republic (29 January, 2007)

Order of the Three Stars (Commander of the Grand Cross) of the Latvian Republic (10 August, 2009)

Order of Stara Planina of the Republic of Bulgaria (14 November, 2011)

Honorary Professor of University of National and World Economy of Bulgaria (23 September, 2005)

Honorary Doctor of Social Sciences of Corvinus University of Budapest of the Republic of Hungary (18 February, 2008)

Honorary Doctor of Kiev National University named after Taras Shevchenko of Ukraine (22 May, 2008)

Honorary Professor of History of Renmin University of China (11 December, 2015)

Special Award of the European Amateur Boxing Association (1 May 2004)

“Grand Cordon” Order of Merit of the International Military Sport Council (27 May, 2005)

Honorary decoration of the International Confederation of Sport Organizations of CIS countries, (26 September, 2005)

Report News Agency congratulates President Ilham Aliyev on the occasion of his birthday and wishes him long life, rebust health and success in his acivity!