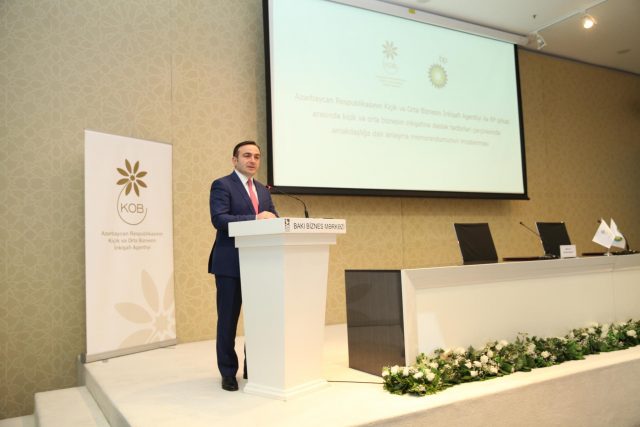 A more solid platform will be created for the implementation of new initiatives in the field of small and medium-sized businesses (SMEs) in Azerbaijan thanks to the cooperation with BP company, Trend reports referring to Chairman of the Board of the Azerbaijani Agency for Development of Small and Medium-Sized Enterprises Orkhan Mammadov.

Mammadov made the remarks in Baku on Dec. 20 during the ceremony of signing a memorandum of understanding between the Agency and BP.

“The memorandum envisages support for the development of SMEs in the country,” he said.

Mammadov stressed that the Agency appreciates the cooperation with BP, which throughout its activity in Azerbaijan has given impetus to sustainable development in the country not only in the energy sector, but also in the development of SMEs.

“BP is a leader in investments in our country and is also one of the important customers in the SME sector,” he said. “From this point of view, we are interested in expanding BP’s participation in the SME sector in Azerbaijan.”

“BP is also known for its activity in social projects in the countries where it operates,” Mammadov said, adding that BP is exemplary company in the implementation of these principles in Azerbaijan.

He added that in the future, the Agency and BP will continue to cooperate for the development of the non-oil sector and the promotion of clustering.

“The establishment of the Agency for Development of Small and Medium-Sized Enterprises upon the president’s initiative was stipulated by the need to organize a modern management system in SMEs,” he added.

“The Agency, despite the short period of work, successfully implements the tasks set by the president in this direction, and has already begun to implement strategic projects,” he said. “We implement these projects together with the corresponding bodies and structures.”

Among such projects, Mammadov called the creation of SME Houses, the creation of the Friends of SME network, which will play a key role in developing a dialogue between Azerbaijan and entrepreneurs and in creating activity based on the needs of entrepreneurs, creating a training system in accordance with the modern requirements and others.