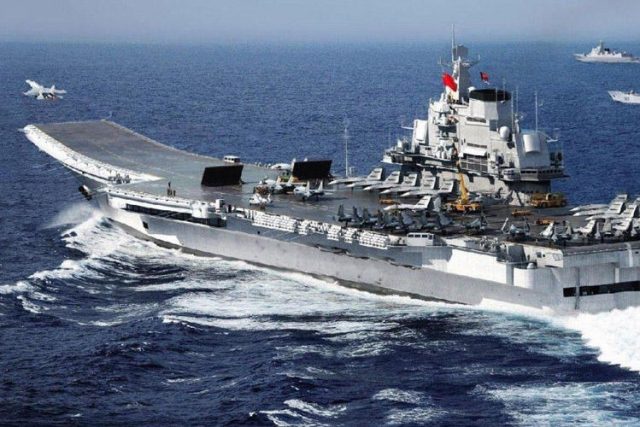 State-owned shipbuilder CSIC is working against the clock to get its two aircraft carriers ready for military use, and in time for 70th anniversary celebrations marking the founding of the People’s Republic of China in October next year, Trend reports referring to The South China Morning Post.

At present, both warships are being worked on at China Shipbuilding Industry Corporation’s shipyard in Dalian, in northeastern Liaoning province.

The Liaoning, the country’s first and only operational aircraft carrier, is undergoing a revamp – its first major upgrade since it was commissioned in 2012.

Meanwhile, China’s first domestically developed aircraft carrier, the Type 001A, has yet to go into service but is expected to begin a fourth sea trial in the coming days.

Photos circulating on the internet show two aircraft on its deck, along with arresting gear that is used to decelerate aircraft as they land, indicating the warship is being readied for another sea trial.

The Type 001A design is based on that of the Liaoning, a Kuznetsov-class carrier that China bought from Ukraine in 1998 when it was half-built and spent a decade refitting.

Hong Kong-based military expert Song Zhongping said the Type 001A could be handed over to the Chinese navy as early as August next year, to mark the 92nd anniversary of the establishment of the People’s Liberation Army.

“The carrier is likely to be named the Shandong because Shandong province is right next to [CSIC’s] shipyard in Dalian, Liaoning, and both Liaoning and Shandong are coastal provinces,” said Song, a former PLA officer who is now a military commentator with Phoenix Television.

China named its first aircraft carrier the Liaoning because the vessel was refitted at the Dalian shipyard.

Sources close to CSIC said the company was under great pressure to deliver the two warships on schedule, especially after Sun Bo was sacked as its general manager.

The Central Commission for Discipline Inspection made that announcement on Monday, saying Sun had also been expelled from the Communist Party and was being investigated by the country’s judicial bodies. He had been in charge of China’s aircraft carrier programme for more than a decade.

The anti-corruption watchdog said Sun, 57, was found guilty of trading power for financial gain and accepting bribes, but sources said he was being investigated for allegedly passing state secrets to foreign intelligence agents. They said he could face the death penalty or a suspended death sentence if convicted.

But a source close to the PLA Navy said he believed the Sun case would have limited impact on China’s aircraft carrier programme because the allegations concerned confidential information about the Liaoning – and the technology used for its latest warship, the Type 002, was more advanced.

The Type 002, which is still being built, will be fitted with the world’s most advanced aircraft launch system – an electromagnetic system known as EMALS that was used on the nuclear-powered USS Gerald Ford supercarrier.

However, work has slowed on the third aircraft carrier, as tensions between China and the United States have escalated and amid budget pressure from Beijing, military sources told the South China Morning Post last month.

Song said the Type 001A also had weapons and electronics systems that were more advanced than the Liaoning’s, though the first aircraft carrier’s combat capabilities were being upgraded.

“This means China will have two fully operational aircraft carriers when the Shandong is commissioned next year,” Song said.

Beijing-based naval expert Li Jie said the Liaoning revamp would also include a new and streamlined island command centre to provide more space on the flight deck for aircraft operations, and the installation of more advanced radar and electronics systems, and damage control equipment.