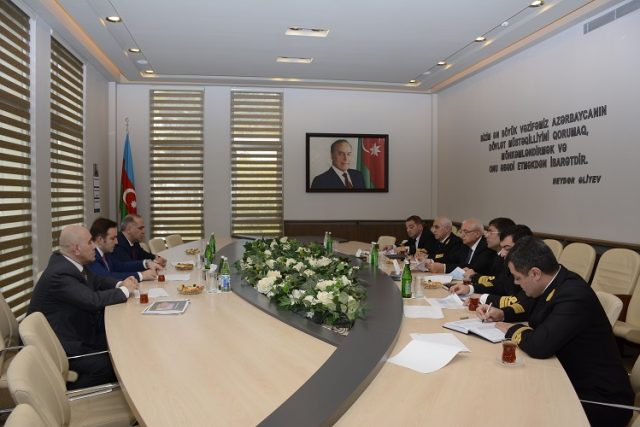 Mr. Gudrat Gurbanov, Director of the State Maritime Agency under the Ministry of Transport, Communications and High Technologies, received Bakhtiyar Aslanbayli, Vice President for Communications, External Affairs, Strategy & Region at BP Azerbaijan and other officials. After delivering opening remarks, Gudrat Gurbanov laid emphasize on the close relationship that was developed through the BP-operated projects in Azerbaijan. Mr. Gurbanov underlined that President of the Republic of Azerbaijan Mr. Ilham Aliyev’s special attention to the maritime transport, plays a vital role in the development of this sector.

Mr. Gurbanov highlighted that State Maritime Agency gives particular importance to study the practice of leading countries and apply the best practice in our country, in addition he noted that multilateral cooperation is developed not only with International Maritime Organization, but also with International Labour Convention, European Maritime Safety Agency, Black Sea Economic Cooperation as well as other international and regional organizations.

Mr. Bakhtiyar Aslanbayli, Vice President for Communications, External Affairs, Strategy & Region at BP Azerbaijan, informed that BP has now been operating in the region for more than 25 years and stressed the importance of enthusiastic support received from Azerbaijan government in managing the projects which are undertaken by BP. Among other government organizations, Mr. Aslanbayli drew special attention to the support received from State Maritime Agency. He remarked that this solid partnership is based on Azerbaijan’s faith and trust in BP as well as BP’s confidence in social and economic stability of Azerbaijan. The guests exchanged their views on future plans, projects, technical parameters together with the support that is needed for running the projects and other issues of great significance. Director of the State Maritime Agency Mr. Gurbanov expressed readiness to support the complex measures that should be taken in accordance with the legislation, exchange specialist advice and other principal issues. After the meeting the guests became acquainted with the National Centre under the State Maritime Agency.