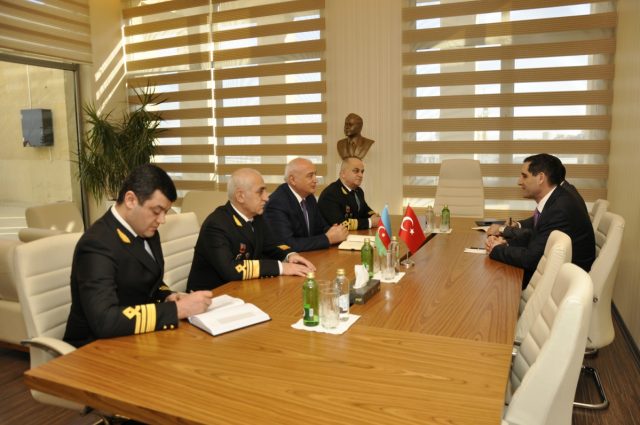 Emphasizing the friendly relationships between Azerbaijan – Turkey have historical roots, Gudrat Gurbanov the Head of the State Maritime Administration stated that the cooperation between the Republic of Azerbaijan and the Republic of Turkey on maritime transport is in high level. Concerns of the President of the Republic of Azerbaijan İlham Aliyev on developments of maritime transport sector, accomplishments on fleet innovations and detailed information was given in regards to contributions that provided by our Republic to the improvements of transport corridors. It was emphasized during the meeting the continual support of our country to the Republic of Turkey in Assembly, the highest Governing Body of the International Maritime Organization, the specialized agency of United Nations furthermore in elections to Council of mentioned Organization and sessions at Sub-Committees.At the same time, present proper circumstances for “Turkish Lloyd” classification society in enhancing their functions, gradually development of maritime shipping in our country and necessity of performing the expedient measures by using this circumstance in technical survey for the vessels have been highlighted. Practice and functions of seafarers of Azerbaijan were underlined, performance and service of experienced Azerbaijani seafarers either in the vessels of Azerbaijan or under the flag of foreign country were also put it in attention.
Extraordinary and Plenipotentiary Ambassador of the Republic of Turkey in our country Mr. Erkan Ozoral mentioned his former service in Azerbaijan and described the incredible developments that he encountered upon his return to our Country. During his visit to Long Range Identification and Tracking National Center, Ambassador noted that recent development processes in every field in our Country, have also reflected in the functions of our State Maritime Administration quite extensively.
Ambassador also stated that achievements as result of reasonable measures taken by the State Maritime Administration on maritime field make the Republic of Azerbaijan attractive for classification societies. Emphasizing that “Turkish Lloyd” is one of the leading classification societies and there are several ships flying the flag of the Republic of Azerbaijan are technically assessed by the mentioned Classification Society, the Ambassador expressed his appreciation for State Maritime Administration’s support to the “Turkish Lloyd”.
Stating that about ten ships flying the flag of the Republic of Azerbaijan are operated in the Black Sea and the number of vessels is constructed in the Turkish shipyards, the importance of enhancing the future collaboration in the mentioned field is expressed in the meeting.