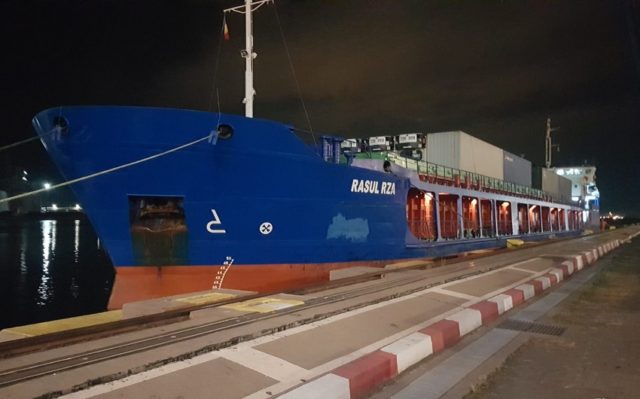 Rasul Reza feeder vessel service, an ADY Container and ASCO (Azerbaijan Caspian Sea Shipping) joint project in the Black Sea mainly used for cargo transportation from China to Europe and in the reverse direction, delivered cargo from Central Asia to the port of Constanta in Romania, ADY Container said, as quoted by Report.

“This is the first shipment with this vessel from Central Asia,” the company said.

According to information, a block train containing 24 containers of mineral fertilizer was dispatched from Uzbekistan. After the train arrived at the port of Turkmenbashi in Turkmenistan, the 40-foot containers were transported to the port of Alat by Mahmud Rahimov vessel, which carries out feeder transportation across the Caspian Sea. Here, it was loaded on platforms and delivered by railway to the port of Batumi, Georgia, and then by Rasul Reza feeder vessel to Constanta.

“The involvement of cargo from Central Asia in this service will serve to increase the role of our country in strengthening the transport connectivity in the new geopolitical situation, along with China-Europe, Central Asia-Europe and in the reverse direction, and to become one of the main participants in ensuring sustainability in the process of transporting cargo on this route,” ADY Container said.