The expert noted that the beginning of the Russian-Ukrainian war increased interest in this region: “In Azerbaijan, goods are transported mainly by roads. Pipelines and rail transport follow. Sea and air transportation is carried out to an even smaller extent. Many traditional land routes were closed due to the war between Russia and Ukraine and sanctions against Russia. All roads from Russia towards Poland, Ukraine, Finland through Latvia, Estonia, Belarus are now closed. Therefore, all attention is paid to the southern direction. There is multimodal transportation in our region. There is international Trans-Caspian route (Middle Corridor) connecting East to West, Pacific Ocean-Central Asia route. After the completion of the first phase of the development of the Baku port, we have the opportunity to receive 15 million tons of cargo and 100,000 TEU, that is, 20-foot containers. Cargo transportation from the East passes through Azerbaijan and Georgia and from there to the south of Europe. The advantage for Azerbaijan is that we are not dependent on one port. In the Caspian Sea, we also have the international sea trade port of Hovsan. On the other hand, the port of Zira is under construction.”

He added that after 2017, Azerbaijan has done a lot of work in the railway sector: “This work is ongoing. The road surface and the signaling system in the Baku-Boyuk Kesik direction have been renewed. The highway from Baku to Ganja has already been expanded to 4 lanes. The road infrastructure is being created on territory of 130 kilometers from Ganja to the Red Bridge.”

Agamirzayev said that a tunnel complex is being built in Georgia at the Rikot Pass as part of the East-West corridor: “The construction of the tunnel is planned to be completed this year. It will seriously affect both the speed and the volume of cargo transportation and will allow 50 million tons of cargo to be transported along this corridor. After the opening of the Zangazur corridor in Turkiye, there will be new opportunities for Azerbaijan. We will get the shortest route to the port of Mersin in Turkiye. In the future, it is planned to lay railway lines to the Turkish port of Trabzon. Also, a logistics terminal and a port will be commissioned in the near future in the province of Rize in the northeast of Turkiye. All this creates new opportunities in the region. After the opening of the Zangazur corridor, there will be an alternative access to the Black and Mediterranean Seas.” 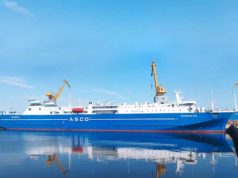 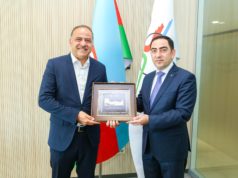