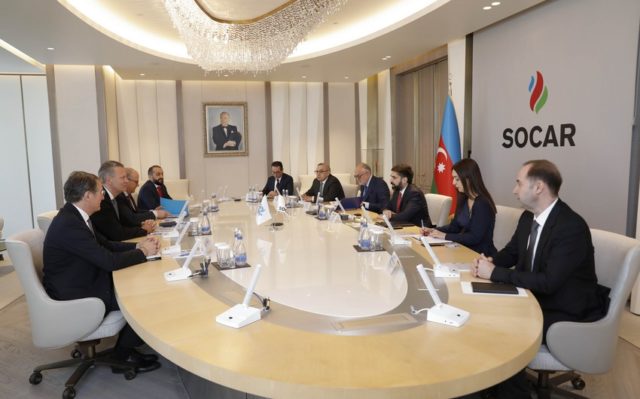 SOCAR First Vice President, Acting President Rovshan Najaf met with a delegation led by Uniper CEO Klaus-Dieter Maubach on April 28, within the framework of the 7th meeting of the Coordinating Committee between the State Oil Company of Azerbaijan (SOCAR) and the German company Uniper.

Najaf spoke about the relations between Azerkimya Production Association and Uniper, as well as the prospects for expanding existing cooperation, and stressed the importance of the activities of the Coordinating Committee in this regard. He noted the vital role of Uniper’s experience in the implementation of joint projects.

Expressing satisfaction with his first visit to Azerbaijan, Klaus-Dieter Maubax praised the successful partnership with SOCAR and stressed the significance of further developing these business relations.

During the meeting, the sides exchanged views on various areas of collaboration between SOCAR and Uniper, energy transfer, as well as issues related to renewable energy and other issues of mutual interest.