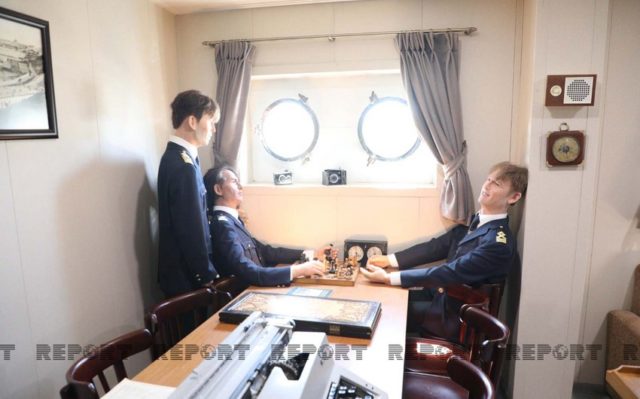 The number of visitors to the Surakhani tanker-museum operating in Baku is growing every day. Not only local residents, but also tourists visit the world’s first tanker museum. Here, guests have the opportunity to get to know the history of the Caspian Sea and shipping in the country, the selfless work of the heroic Azerbaijani sailors.

Report’s employee visited the tanker-museum “Surakhani,” examined the halls, got acquainted with the exhibits.

Museum visitors are provided with the first unique 360-degree screen in Azerbaijan with detailed information about both the history of Azerbaijan and navigation.

Museum guide Leyla Bagirova told Report that most of the visitors to the tanker museum are schoolchildren and students: “There are also enough tourists among the visitors. They also take pictures here and leave with pleasant impressions.”

Entrance to the museum costs 5 manats, the fee for a group of 8-10 people is 3 manats per person, while schoolchildren and students will have to pay 2 manats. For families of martyrs and participants in the Second Karabakh War, admission to the museum is free.

On March 1 last year, Azerbaijani President Ilham Aliyev attended the opening of the world’s first tanker museum Surakhani, which combines the past, present and future of navigation with ancient history.

It is no coincidence that the Surakhani tanker was chosen for the museum’s creation. This vessel was one of the largest and most modern tankers of its time. Sailing in the Caspian Sea, the Surakhani ship played a big role in the history of Azerbaijan’s oil transportation by sea, which began with the world’s first tanker “Zoroaster.” The tanker “Surakhani” with a length of 123.5 meters and a deadweight of 4,696 tons belongs to the type of vessels “Engineer A. Pustoshkin,” launched for the first time in the Caspian Sea in 1957. The decision to turn the Surakhani tanker, which until recently was used as an oil refinery of the shipping company, into a museum was made in 2017.

To turn the tanker into a museum, the ship was overhauled and reconstructed. For this purpose, the personnel and technical resources of the Bibi-Heybat ASCO Shipyard and Khazar LLC were mobilized. More than 2,000 ship repairmen were involved in the repair and reconstruction of the hull and other parts of the ship.

When creating the museum, the experience of such countries as the UK, the Netherlands and Turkey, which have ancient shipping traditions, was used. In order for the museum ship to meet international standards, cooperation was established with more than 100 influential foreign and local companies.

The concept and design of the project was presented by the British company FreemanXP. Having implemented many successful projects, the company has 90 years of experience in this field. The project was developed by the Dutch company Hypsos, which is distinguished by its professionalism in the design of world-famous museums, scientific centers and pavilions of various subjects.