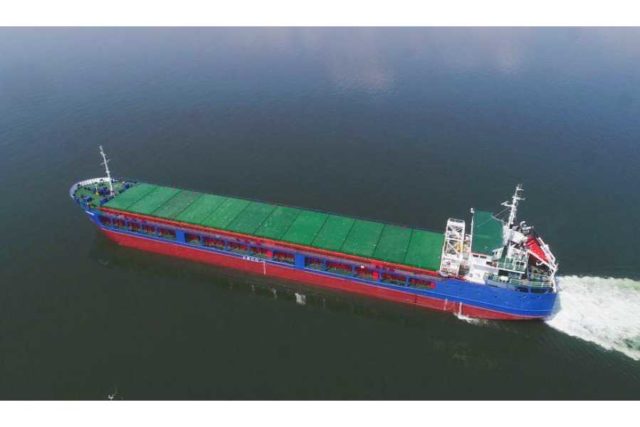 Azerbaijan Caspian Shipping Company (ASCO) is constantly giving attention to the innovations implemented in global shipping and taking continuous steps towards adapting its activities to technological solutions and innovations, as well as to modern requirements.

One of the important steps taken by ASCO in this direction relates to the compliance with the requirements of the International Maritime Organization (IMO) to reduce sulfur oxides in the gases emitted from ship engines and boilers during the operation of ships.

Generally, there are a few available technical solutions designed for reducing sulfur oxides emitted into the atmosphere from ships:

– Replacement of main engines of ships with dual-fuel engines;

– Transition of ships to low sulfur fuel containing the amount of sulfur up to 0.5%;

The relevant structural units and specialists of ASCO have thoroughly examined all the methods mentioned while taking into account the age, fuel consumption, cargo capacity of the vessels and the amount of emission to the environment. Thereby, special attention was paid to the more cost-effective options such as the  “Installation of equipment (SCRUBBER) designed to clean gases emitted from ship engines and boilers” and “Transition of ships to low sulfur fuel containing the amount of sulfur up to 0.5%”.  The conducted research revealed that if a SCRUBBER system is installed onboard the vessels of the ASCO fleet, such installed units are required to operate for 17 years to pay their way which is not considered to be profitable. For this reason, it was deemed reasonable to shift the vessels to a new type of fuel containing a sulfur amount up to 0.5%. According to the decision, ASCO has been using, for more than two years, fuel containing a sulfur amount up to 0.5% for its vessels sailing in the international waters.  Despite the transition to the new type of oil, operation and maintenance of the vessels are being performed successfully.

It should be noted that, according to studies, thousands of people are infected of diseases that are incurable with lethal outcomes each year as a result of the emittance of sulfur oxides into the atmosphere. It is believed that the transition of vessels navigating in global waters to low-sulfur fuel will prevent up to half a million people a year from facing such risks and hazards. Moreover, global warming is predicted to be reduced to 10°C if vessels are shifted to low-sulfur fuel or equipped with sulfur oxide gas cleaning systems.