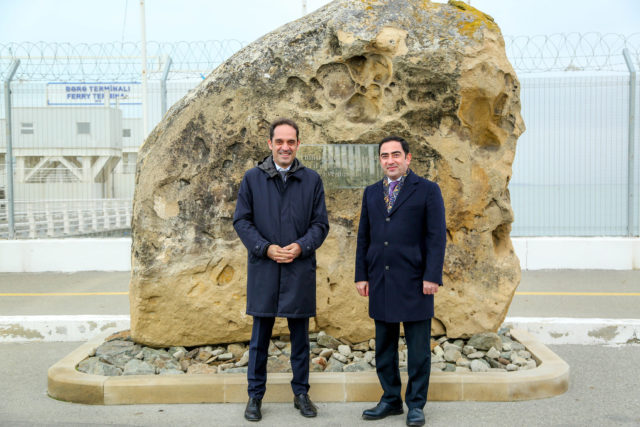 A delegation led by Mr. Frederic Platini, CEO of Euroports Group, paid a business visit to Port of Baku on January 26-27, 2022. The delegation also included officials from the prestigious British companies Nectar Group Limited, which is a partner of the Euroports Group and closely cooperates with the Port of Baku.

As a part of visit the delegation had a meeting with the leadership of Port of Baku in Alat office of the port. During the meeting Dr. Taleh Ziyadov, Director-General of Baku International Sea Trade Port CJSC (Port of Baku), briefed on the history of the port, its development path, activities carried out within the port’s strategy of becoming a world-class logistics and transport center in the region, as well as successes, achievements and perspectives of the port.

The CEO of Euroports Group, Mr. Platini emphasized that European seaports are interested in further strengthening business relations with existing ports in the Eurasia region, and particularly he stressed the importance of cooperation with the Port of Baku, which plays a central hub role in the regional transport corridor.

Then the delegation got acquainted with the port operations of General Cargo, Container, Ro-ro and Ferry terminals of the port, they also had a chance to learn about the cargo handling equipment that currently are utilized in the port. The delegation also got familiarized with the technical capabilities of the ships berthed at the port and were informed about the technologies used to provide efficient cargo handling in the port area. In addition, the delegation met with team of the relevant departments of the port and had an interactive discussion and exchange of experiences.

Port of Baku is committed to its values of transparency, modernity and exemplary, and aims to learn and apply the best practices and maritime solutions.