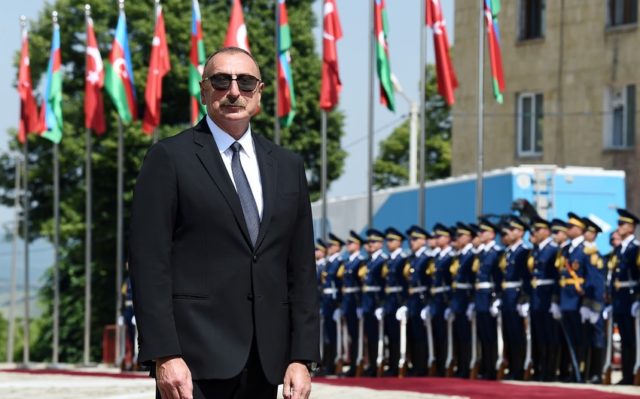 Today is the 60th birthday of the President of Azerbaijan, Victorious Commander-in-Chief of the Armed Forces Ilham Aliyev.

On September 27, 2020, in response to a large-scale provocation by the Armenian Armed Forces on the frontline, the Azerbaijani Army launched a counter-offensive, later called the Iron Fist. The 44-day Patriotic War ended with the liberation of Azerbaijani territories from occupation thanks to the leadership, diplomatic skills, principled attitude and iron will of the Supreme Commander-in-Chief, President Ilham Aliyev, and the territorial integrity of Azerbaijan got ensured. Thus, under the Supreme Command of President Ilham Aliyev, our army, implementing the unfulfilled UN Security Council resolutions, cleared Karabakh of the enemy in a short time. All this results from Ilham Aliyev’s far-sighted policy, commanding skills, political, economic, and military reforms implemented in Azerbaijan, successful foreign policy.

The first degree Order of Alexander Nevsky of the Academy of Problems of Security, Defense and Order of the Russian Federation (April 11, 2005)

The Order of Alexander Nevsky 1st class of the Academy of Problems of Security, Defense and Order of the Russian Federation (April 11, 2005)

Heydar Aliyev Order of the Republic of Azerbaijan (April 28, 2005)

“Sheikhulislam” Order of the Caucasus Muslims Board (December 22, 2005)

Grand Cross of the Legion of Honor of the French Republic (January 29, 2007)

Grand Cross of Order of Merit of the Republic of Poland (February 26, 2008)

Order of the Three Stars (Commander of the Grand Cross) of the Latvian Republic (August 10, 2009)

Order of Stara Planina of the Republic of Bulgaria (November 14, 2011)

Honorary Doctor of Petroleum and Gas University of Ploesti of Romania (October 12, 2004)

Honorary Professor of University of National and World Economy of Bulgaria (September 23, 2005)

Honorary Doctor of Social Sciences of Corvinus University of Budapest of Hungary (February 18, 2008)

Honorary Doctor of Kyiv National University named after Taras Shevchenko of Ukraine (May 22, 2008)

Honorary Professor of History of Renmin University of China (December 11, 2015)

Special Award of the European Amateur Boxing Association (May 1, 2004)

“Grand Cordon” Order of Merit of the International Military Sports Council (May 27, 2005)

Honorary decoration of the International Confederation of Sport Organizations of CIS countries (September 26, 2005)

Report News Agency congratulates President Ilham Aliyev on his 60th birthday and wishes the Supreme Commander-in-Chief a long life, good health and success in his endeavors!