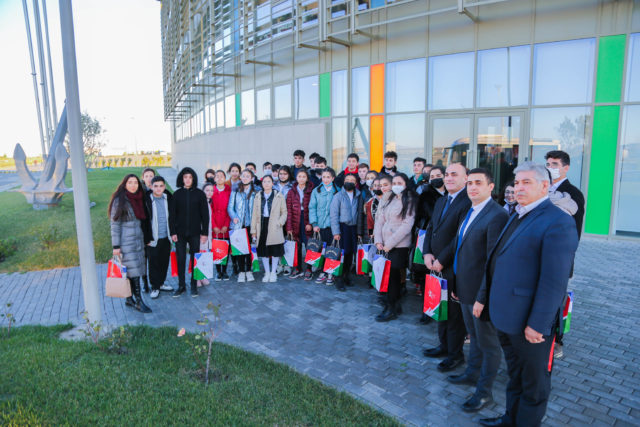 On the eve of the Solidarity Day of World Azerbaijanis and the New Year, the “Baku International Sea Trade Port” CJSC, together with the Baku City Education Department, held a knowledge contest named “Victory” for students studying at schools 105, 110, 127, 302, 303 in Alat settlement of Garadagh district. 5 teams, each consisting of 6 people, took part in the intellectual game. Students competed for the first place by answering questions about the Patriotic War, the history of Azerbaijan, the geography of Azerbaijan, general knowledge, as well as the activities of the Port of Baku. At the end, the winning teams and all participants in general were presented with valuable gifts, as well as certificates. It should be noted that before the competition, the participants visited the monument and park complex dedicated to the memory of the port workers who rose to the peak of martyrdom in the 1st and 2nd Karabakh Wars and got acquainted with the working principle of the Port of Baku terminals.

The “Baku International Sea Trade Port” CJSC regularly organizes events within the social responsibility program and always keeps the residents of Alat settlement of Garadagh district, where the Port of Baku is located, in the center of attention.