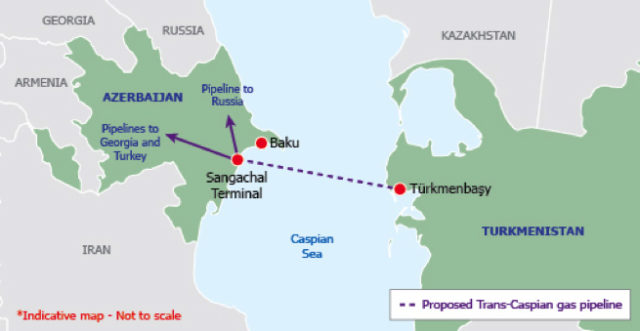 Azerbaijan has great potential in the energy sector, Shana agency reported the words of the Iranian Oil Minister Javad Ovji after a meeting with Azerbaijani Deputy Prime Minister Shahin Mustafayev.

According to the minister, today Iran and Azerbaijan have reached agreements in the gas sector.

“During today’s (November 21) talks with a delegation headed by Deputy Prime Minister of Azerbaijan Shahin Mustafayev, constructive negotiations were held and an agreement was reached on swap deliveries of gas from neighboring countries to Azerbaijan through Iran, in particular, Turkmen gas,” Ovji said.

In 2016 Azerbaijan already received Turkmen gas under a swap contract through Iran.

However, it is not clear why Azerbaijan needs Turkmen gas? Indeed, according to official statistics, in January-October 2021, Azerbaijan produced 26 billion 427.9 mcm of commercial gas volume. This is 22% more than in the same period last year. At the end of 2020, the country produced 26.06 bcm of commercial gas. That is, if the growth rates are maintained until the end of the year even at the level of 20%, in 2021, for the first time in history, Azerbaijan is expected to produce more than 31 bcm of gas.

12 bcm of gas is enough for the domestic market of Azerbaijan. If we take into account the technical volumes of gas residues in the country’s underground gas storage facilities (Garadagh and Galmaz), then the export volumes will amount to 18 bcm.

It can be considered that Azerbaijan insures itself against a more severe winter and a prolonged heating season. However, to prevent such cases at the end of July 2021. Azerkontrakt (the state monopoly for the wholesale of gas in the domestic market of Azerbaijan) and Gazprom signed a contract on mutual gas supplies for the period up to 2023. We are talking about a seasonal exchange of natural gas – in the summer, gas supplies are carried out from Azerbaijan to Russia, and in the winter season, similar volumes are supplied in the opposite direction.

Maybe Azerbaijan wants to import Turkmen gas with the aim of supplying it to the Turkish or European markets?

Yes, these volumes will be small – no more than 1 billion cubic meters (the throughput of the Astara-Hajigabul gas pipeline in the reverse direction) – but a good start for gas supplies along the Southern Gas Corridor from the other side of the Caspian Sea. It should be noted that in Azerbaijan the government does not disclose the country’s gas balance.

Therefore, it is very difficult from the outside to determine how much gas is planned for the needs of the domestic market, what volumes are planned to be exported, and what volumes are stored in underground gas storage facilities. This year the government did not even consider it necessary to inform when the gas extraction from underground gas storage facilities began.