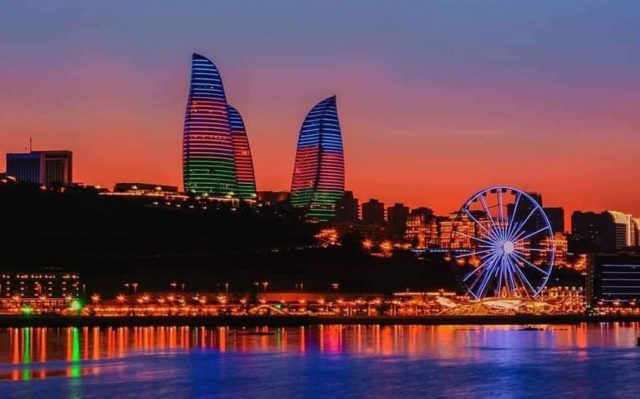 Today is the National Flag Day in Azerbaijan, Report informs.

According to the decree of the President of Azerbaijan Ilham Aliyev dated November 17, 2009, November 9 is celebrated as the National Flag Day in the country.

After the restoration of the independence of the Republic of Azerbaijan, the tricolor flag of Azerbaijan became a symbol of national sovereignty as a symbol of sacred statehood for all citizens of the country.

This flag, which is the memory of the Azerbaijan Democratic Republic, demonstrates our commitment to our ideology of freedom, national and moral values, and universal ideals.

The three-color national flag of Azerbaijan was approved by the government of the Azerbaijan Democratic Republic (ADR) on November 9, 1918, and had a state status until April 1920. Many years later, on November 17, 1990, at a session held on the initiative and under the leadership of the Chairman of the Supreme Majlis of the Nakhchivan Autonomous Republic, the national leader of the Azerbaijani people, Heydar Aliyev, this flag was approved as the flag of the Nakhchivan Autonomous Republic.

This year, for the first time, National Flag Day is celebrated in the liberated lands of Azerbaijan. As a result of counter-offensive operations carried out by the Azerbaijani Army since September 27 last year, our areas, which had been under enemy occupation for many years, were freed. During the 44-day war, settlements were liberated every day, and the glorious flag of Azerbaijan was hoisted on those lands. At present, our flag is waving in all liberated lands.