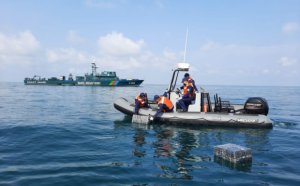 Technical observation points of the coast guard of the State Border Service (SBS) spotted and took under observation three unknown targets that penetrated the territorial waters of Azerbaijan from the southern direction and were moving northwards at 11:00 pm (GMT+4) on October 16.

Report informs, citing the press center of the State Border Service, that to intercept the floating craft that illegally entered the territorial waters of Azerbaijan, border patrol vessels guarding the state border in the Caspian Sea were immediately dispatched to the indicated direction.

The patrol vessels of the coast guard of the State Border Guard Service prevented the movement of unknown floating means. After warning shots opened from a patrol vessel, the pursued floating craft threw their cargo overboard and reversed, leaving the territorial waters of Azerbaijan.

The discarded cargo was recovered from the water. The inspection revealed 23,780 cigarette packs of a total cost of about AZN 100,000.