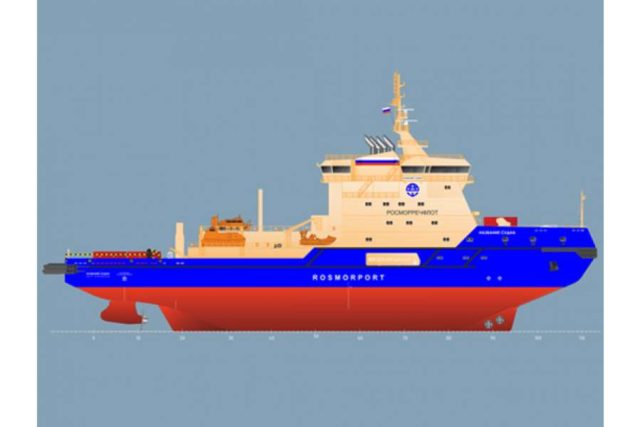 A Turkish shipbuilding and ship repair specialist Kuzey Star Shipyard on August 5, 2021 signed an agreement with Petrozavodsk, Karelia based Onego Shipyard (Onego Shipbuilding Yard Ltd.) for the construction of two state-of-the-art dual-fuel icebreakers of Project 23620 for Rosmorport, as a subcontractor of the newbuilding project, four sources familiar with the matter told PortNews.
The contract value between Onego Shipyard and Kuzey Star Shipyard was not disclosed.

As PortNews has reported earlier, in mid-July Rosmorport and Onego Shipyard signed an agreement for the construction of two LNG-powered icebreakers. According to the Rosmorport press office, the two icebreakers contracts total cost is valued at RUB 18.5 billion. The icebreaking fleet construction project is part of the Comprehensive Plan for the Modernization and Expansion of the Main Infrastructure (KPMI). This is the first Russian project of an icebreaker with LNG powered propulsion .

The Icebreaker 7 class 12-14 MW vessels will be able to sail in the 1.5-m thick ice, with unrestricted navigation and will be able to operate year-round in the Baltic, White, Barents and Pacific seas.

Kuzey Star Shipyard on August 21, 2020, in partnership with Leningrad Region, Shlisselburg based Nevsky Shipyard (part of USC) launched the first LNG-powered traub ferry Marshal Rokossovsky (YN 191) of Project CNF19M developed at Marine Engineering Bureau. The ARC4 class LNG-powered ferry was ordered by FSUE Rosmorport to operate year-round on Ust-Luga – Baltiysk ferry route unescorted by icebreakers.
This is the largest vessel ever launched in the history of Turkish shipyards.

The second similar ferry the General Chernyakhovsky sister ship of CNF19M project was launched at Kuzey Star Shipyard on May 22, 2021.

In June 2021, the Kommersant reported the agreement for the construction of a floating dock for nuclear icebreakers between the Turkish shipyard and Rosatom’s FSUE Atomflot. The floating dock was designed for maintenance and repair of nuclear-powered icebreakers, including the Arktika series of Project 22220, and nuclear / support vessels. The contract is valued at RUB 4.981 billion. According to the contract terms the dock will be built within 29 months.

To find out more about the progress of construction and utilization of LNG-powered ships and other alternative fuels please visit the IAA PortNews Conference in Moscow at the end of October >>>>.

FSUE Rosmorport is the world’s largest owner of icebreakers fleet. Under the CPME plan Rosmorport will build 10 icebreakers by 2030, reducing the average age of the icebreaking fleet to an average of 25 years.

Onezhsky Shipbuilding, Ship Repair Yard (ONEGO Shipyard) was founded in 2002 on the basis of ship repair facilities of the Belomorsky-Onezhsky Shipping Company, formed in 1944. In 2011, after the enterprise management dismissal the shipyard production was suspended and was followed by the firm’s bankruptcy procedure. In late 2014 the enterprise was transferred to the state ownership with FSUE Rosmorport as the yard Founder and resumed its shipbuilding and ship repair business.