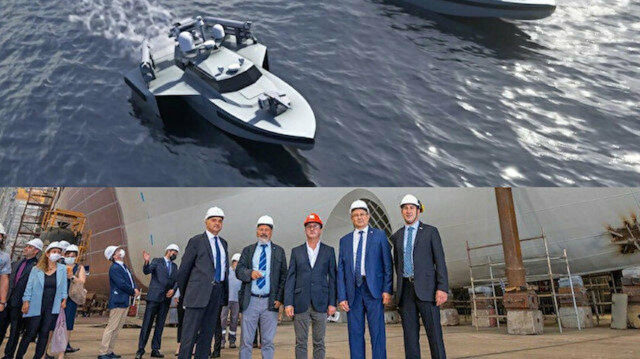 ASELSAN – Turkish Defense Corporation and SEFİNE Shipyard are developing new unmanned sea vehicles for the security of the sea, Turkish media has reported.

The two new Unmanned Aerial Vehicles, of which the production has started, will be used in missions such as autonomous reconnaissance, surface warfare, underwater warfare, and the protection of high-value floating platforms.

Both naval vehicles can exceed 40 knots per hour. Autonomous vehicles with a range of more than 600 nautical miles will serve for about four days without the need for recharge. Autonomous naval vehicles, with high maneuverability and speed, will perform flawless tasks and voyages even in the most difficult sea conditions.

The developed autonomous unmanned sea vehicle will be able to transfer the received images to desired centers in real time, detect and classify surface elements, and perform autonomous navigation and operations while avoiding fixed and moving obstacles even when communication is lost.

The Autonomy software will enable the vehicle to navigate adaptively according to information provided by the sensors on it and can move autonomously in line with the maritime traffic rules.

Both sea vehicles can be transported by cargo planes, military ships or by road and transferred to their duty points.

The autonomous sea vehicle designed for surface warfare can be converted to trimaran form with the expandable platform. Thus, the useful load capacity will be increased for usage of different weapons and systems. It will also be able to perform electronic warfare, underwater warfare and mine warfare functions.

In addition to its surface warfare mission, the vehicle will also be used for the security of military bases and civil ports against asymmetrical threats. It will transmit real-time video and images with the satellite system that it has been provided.

Within the scope of cooperation with “Türk Loydu”, support will be provided for the development of autonomous military ship rules.