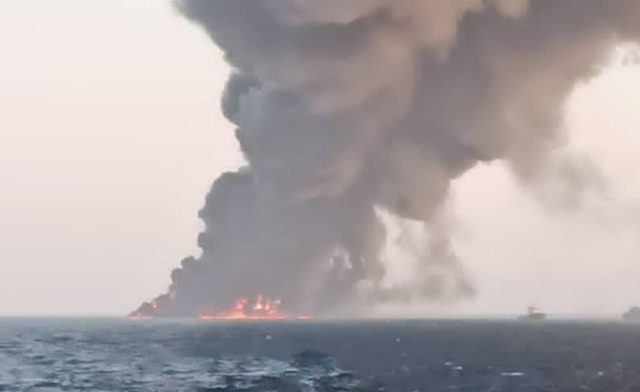 The largest warship in the Iranian navy caught fire and later sank Wednesday in the Gulf of Oman under unclear circumstances, the latest calamity to strike one of the country’s vessels in recent years amid tensions with the West, APA reports citing Fars News Agency.

The blaze began around 2:25 a.m. and firefighters tried to contain it, the Fars news agency reported, but their efforts failed to save the 207-meter (679-foot) Kharg, which was used to resupply other ships in the fleet at sea and conduct training exercises. State media reported 400 troops on board fled the vessel, with some 33 suffering injuries.

The vessel sank near the Iranian port of Jask, some 1,270 kilometers (790 miles) southeast of Tehran on the Gulf of Oman near the Strait of Hormuz — the narrow mouth of the Persian Gulf. Satellite photos from Planet Labs Inc. analyzed by The Associated Press showed the Kharg off Jask with no sign of fire as late as 11 a.m. Tuesday.

According to the Fars news agency, it was an Iranian Navy support vessel that caught fire after departing for a training mission in open waters a few days ago, APA reports citing Sputnik.

A fire erupted on an Iranian Navy vessel in the Persian Gulf on Tuesday, according to the Fars news agency citing navy officials.

The crew has reportedly been safely evacuated from the ship, and firefighting operations are ongoing.

The cause of the fire was not specified in the report, with Fars only mentioning that the fire erupted “in one of the systems”.

The fire did not result in any casualties, according to the report. The incident occurred when the vessel was in the area near the port city of Jask, located in the southern part of Iran. Several days ago the ship reportedly left for a training mission in the open waters of the Persian Gulf.