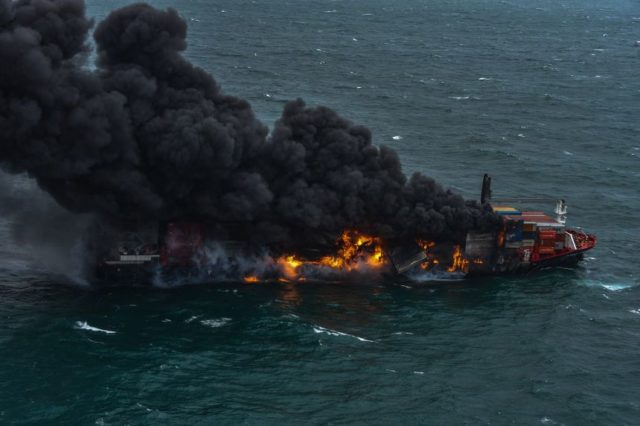 Three Indian vessels joined firefighting operations off the coast of Colombo, Sri Lanka, yesterday to contain a raging inferno on board a Singapore-registered container ship, the X-Press Pearl, after an explosion on Tuesday.

Fears continue that the X-Press Pearl, a vessel that is just three months old, could break apart, spewing tonnes of oil.

“Firefighting tugs have constantly been spraying and misting the stricken vessel with support from the Sri Lankan navy and Indian coast guard, who remain on scene,” said X-Press Feeders, the ship’s operator, in a statement yesterday.

All 25 foreign crew members were safely evacuated on Tuesday, a spokesman for the operator, Mr Andrew Leahy, told The Straits Times.

Two seafarers remain in stable condition in hospital after being injured, one of them during the evacuation. This crew member also tested positive for Covid-19. He is asymptomatic, said X-Press Feeders, and is receiving treatment at a military hospital.

Mr Leahy said: “The other 23 crew members are in a Colombo quarantine facility. They all tested negative (for Covid-19) and they are all in good health.”

The X-Press Pearl, carrying 1,486 containers with 25 tonnes of nitric acid, other chemicals and cosmetics on board, had been en route to Singapore via Colombo.

The ship’s operator refuted an earlier report by an online maritime news portal that said X-Press Pearl had been denied entry into Hazira port in India and Hamad port in Qatar because it was leaking nitric acid.

X-Press Feeders said the ship underwent discharge and loading operations in both ports before continuing its planned journey to Colombo.

“Applications had been made to both ports to offload a container that was leaking nitric acid, but the advice given was that there were no specialist facilities or expertise immediately available to deal with the leaking acid,” said X-Press Feeders.

Several containers from the vessel were reported on Wednesday to have tumbled into the sea and sunk.

“We are trying our best to extinguish the fire as it broke out again due to the continuous reaction of the chemical materials in the containers and adverse weather,” said Mr Rohitha Abeygunawardena, Sri Lankan Minister of Ports and Shipping, on Tuesday.

“We have made plans to carry out future activities in a manner that does not harm the country’s seas and marine environment.”