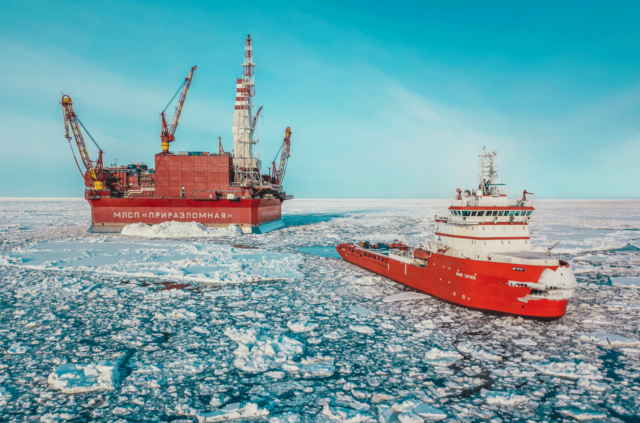 “In the midst of melting ice, where global warming is particularly noticeable, the Arctic Council promises to give new impetus to climate protection. But the participating countries – Russia and Norway – continue to diligently extract oil in the Arctic Ocean, ”writes the German newspaper  Süddeutsche Zeitung .

“For the first time in the 25-year history of the Council, the assembled foreign ministers of the eight Arctic states and representatives of indigenous peoples agreed on a ‘strategic plan’. The plan, which sets as the number one goal preserving the climate, reducing greenhouse gas emissions and “promoting clean energy sources”, – report the journalists Silke Bigalke and Kai Schrittmatter.

“But how serious are the signatories? Council member Norway is also producing oil and gas in the Arctic regions – and more actively than ever. And Russia, the country that on Thursday became the chairman of the Arctic Council for the next two years, has even more ambitious plans for the development of the Arctic. “

Heat – on Wednesday in the village of Nizhnyaya Pesha in the Arctic Circle was recorded 30.3 degrees of heat – was not the only “warning shot” this week, the newspaper writes. “Another came from the Potsdam Institute for the Study of Climate Change (PIK). Scientist Niklas Boers and his Norwegian colleague Martin Rypdahl have presented disturbing research on the Greenland ice sheet. The consequences of the warming in the Arctic have been observed there for a long time. A study by Boers and Rypdahl has shown the first signs of destabilization in specific areas of the ice and warns that the ice sheet is probably approaching a tipping point much faster than previously thought: the point beyond which the melting of Greenland ice can no longer be reversed. “

“Of course, the melting of all the ice will take many centuries, but it will have dramatic consequences: the level of the world’s oceans will rise by seven meters,” the newspaper points out. – (…) Therefore, the authors of the study now call for the reduction of greenhouse gas emissions even faster than before. And they are not alone in this. Just two days before the meeting of the Arctic Council, the International Energy Agency (IEA) presented its report Net Zero by 2050. It calls for an end to investment in new oil and gas fields. Governments must finally “bridge the gap between words and deeds.”

“All the climatic goals that the new chairwoman of the Council Russia has so far set for herself are cosmetic in nature. For Vladimir Putin, the sparsely populated, resource-rich Arctic is both an opportunity and a challenge. Putin wants to make the region more accessible, attract more people, more military personnel, more enterprises. Last year, he published a new Arctic strategy that includes plans to build new icebreakers and rail lines in the north by 2035, ”the article says.

“Climate change opens up new routes in the Arctic Ocean, shortening the distance between Russia and NATO countries: new borders are emerging that need to be protected. The Russian army is actively arming itself in the Arctic, reconstructing abandoned ports and building new ones. This not only serves as a deterrent, but also aims to help make these regions more livable and create jobs. In addition to the military, the president is banking on the oil industry. Russia already produces 90% of natural gas and almost a fifth of oil in the Arctic, ”the authors of the article note.

“Environmentalists complain about discrepancies between words and deeds, but not only on the part of Russia. Norway loves to present itself as a role model in climate policy, but it derives much of its wealth from oil and gas production. Norway is also looking for new oil fields and in 2020 registered new licenses for drilling in Arctic waters. “

“Prime Minister Erna Solberg attended the virtual climate summit of US President Joe Biden at the end of April. But when asked about Biden’s call to stop oil drilling in the Arctic, she replied that it has “little value” for Norway and the country will continue to produce. “

“The vulnerability of the Arctic” should be “an important driving force” for the future of the Arctic Council, according to a new strategic document, which was presented in Reykjavik. Perhaps Member States should take note of this document, ”concludes Süddeutsche.source: Süddeutsche Zeitung