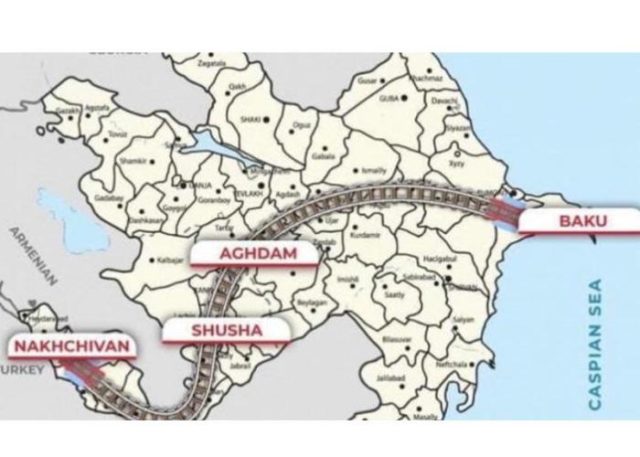 Azerbaijan’s favorable geostrategic position has historically made it possible to use the country’s territory as an important transport hub for routes connecting Europe and Asia. Having chosen this direction as one of the key areas of the country’s non-oil sector, over the years of independence, the authorities and the government have done a great job for the rapid development of transport infrastructure, which made it possible to expand the geography of the destination of goods transported through Azerbaijan. However, in order to withstand the competition with other routes, it is necessary to constantly improve the proposed routes.

The victory of Azerbaijan in the Second Karabakh War, the liberation of the lands occupied by the Armenians and the signed trilateral statement, which provides for the unblocking of transport communications in the region, opened up completely new large-scale opportunities for the development of transit routes through Azerbaijan.

It is known that the Zangazur corridor includes not only railway, but also road communication. When talking about the railway communication, this is the Horadiz-Agband highway, the 44 km Zangazur section, the Armenia-Ordubad and Ordubad-Nakhchivan-Yerevan, Yerevan-Gumri-Kars borders. By the way, last year the construction of the Kars-Igdir railway was launched, which is planned to be connected with Nakhchivan. In addition to this direction, the railways of the South Caucasus and Iran intersect through the Julfa crossing.

As for the road communication through Zangazur, before the start of the Armenian-Azerbaijani conflict in the early 1990s, there was a highway that passed from Nakhchivan through the territory of Armenia to Karabakh and further. Of course, now this road needs to be restored, practically rebuilt, but it is quite profitable both from the point of view of cargo handling and the organization of passenger flow.

With a reasonable approach to the issue, almost all of Azerbaijan’s neighbors, including Armenia, can benefit from the revival of old and implementation of new projects through Zangazur. So far, in its best traditions, Armenia is trying in every possible way to create problems for opening a corridor that should connect Azerbaijan and Nakhchivan through Armenia. “We are implementing the Zangazur corridor, whether Armenia wants it or not. If they do, it will be easier for us, if they do not, we will decide it by force,” President of Azerbaijan Ilham Aliyev said earlier.

Leaving aside the political moments around this issue and the indisputable fairness of Azerbaijan’s position, it should be emphasized once again that the opening of the Zangazur corridor will undoubtedly give a powerful impetus for the economic development of all countries in the region.

Azerbaijan to strengthen its position

The benefits of opening these routes for Azerbaijan are obvious: large regional transit projects – TRACECA, the Belt and Road Initiative and North-South, Baku-Tbilisi-Kars, which allows goods arriving from China to be delivered to Europe within 12 days. The new section through Zangazur will allow both to expand the existing routes, and to offer more favorable conditions for cargo transportation as part of the participation in the Chinese One Belt One Road initiative.

That is why President of Azerbaijan Ilham Aliyev, in his speech at the 77th session of the Economic and Social Commission for Asia and the Pacific (ESCAP), invited the countries of Asia-Pacific to explore the potential of a regional project on the creation of the Zangazur transportation corridor. “Azerbaijan has made enormous contribution to the launch of regional connectivity projects such as East-West, North-South, North-West transportation corridors. We are now working on the “Zangazur transportation corridor”, which will be an integral part of the East-West corridor connecting Asia and Europe through Azerbaijan,” the head of state said, adding that this corridor will allow Azerbaijan to strengthen its position as Eurasia’s transport and logistic hub.

For us, there are also narrower, but no less important advantages of opening the corridor – this is, of course, the maximum simplification of the delivery of goods from Nakhchivan to the rest of the country and back, as well as to the world market. Thus, the economic development of the autonomous republic, after many years of difficulties associated with an almost blockade state, will receive a powerful impetus. In addition, Azerbaijan will have the opportunity to implement new infrastructure projects in this region, significantly reduce its dependence on Iran in solving problems with energy and gas supply to Nakhchivan.

Turkic world in one route

As for the benefits for Turkey, first of all, through this corridor, it will receive a direct land road to Azerbaijan, one of its main economic partners. Thus, the distance between the two countries will be reduced by 400 km, which, naturally, will make transport links even more profitable and competitive. Also, for Turkey, this is an opportunity for direct access to the countries of Central Asia, a kind of reunification of the Turkic world in one transport route. Thus, the door to the huge $3 billion Asian market will also open for Turkey.

According to the Turkish media, in addition, the opening of the Zangazur corridor will contribute to a fall in prices for gas supplied to Turkey from Iran, and in general, the creation of new profitable energy routes.

As for Russia, this corridor could become the main route for transporting goods to the South Caucasus and neighboring countries, as well as an alternative route to enter the Middle East markets through Turkey.

Armenia could get out of the crisis

Finally, for Armenia, the opening of communications through Zangazur is the most profitable of all. First, it will finally get a rail link with Iran, one of its main economic partners. As is known, precisely because of the lack of the necessary financial resources and the inability to attract foreign investments, Armenia was unable to build a railway to Iran from its territory. Now, freight traffic between Iran and Armenia can be carried out along a new corridor. In fact, in this way, it will also get rid of the economic blockade into which it has driven itself over the past 30 years due to the occupation of the Azerbaijani territories.

“Armenia currently has no railway links with its ally Russia. This railway link can be established from the territory of Azerbaijan. Armenia has no railway connection with its neighbor Iran. This railway can be provided through Nakhchivan,” Azerbaijani President Ilham Aliyev said. Finally, establishment of real peace in the region with the opening of communications will greatly increase Armenia’s investment attractiveness. Azerbaijan didn’t have any particular problems with this even before the Second Karabakh War, while businessmen refrained from investing in Armenia both because of the conflict and because of the lack of profitable transport routes.

Thus, Armenia can get out of the economic crisis and somehow make life easier for its citizens, who are now suffering from high levels of poverty and unemployment. As a result, Armenia sees a mass outflow of its citizens, which is already turning into a serious demographic problem for the country.

In short, the unblocking of communication corridors in the South Caucasus, especially the Zangazur corridor, will strengthen not only the position of Azerbaijan as a transport and logistics hub at the junction of Europe and Asia, but will also promote, in general, the use of the rich economic potential of the region to improve the well-being of all its member countries.