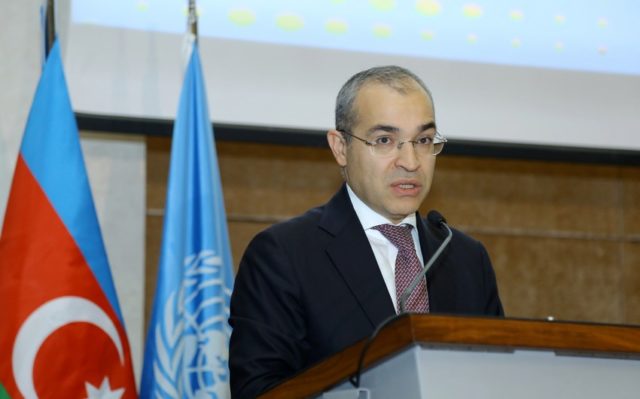 A meeting with local companies involved in international transportation by road took place with the support of the Ministries of Economy and Transport, Communications and High Technologies, the Azerbaijan Export and Investment Promotion Foundation (AZPROMO), Report informs referring to the Azerbaijani Economy Ministry.

The business meeting, held to support local transport enterprises and carriers, was attended by representatives of government agencies, companies operating in the field of international road transportation.

Minister of Economy Mikayil Jabbarov, speaking at the event, emphasized that the head of state, along with other areas of the economy, attaches particular importance to the development of infrastructure in Azerbaijan and said that large state investments have been made in this area. As a result of the work done to improve the transport infrastructure, a modern infrastructure has been created, transit opportunities have been expanded, Jabbarov added.

It was noted that in accordance with the economic and political reforms successfully carried out in the country, important measures have been recently taken to increase the export, import and transit turnover in the non-oil sector. This, in turn, has a positive effect on the growth of the volume of international cargo transportation.

Stressing that infrastructure plays an important role in the development of the economy and achievement of the goals set, Mikayil Jabbarov said that there is great competition in the cargo transportation market and noted the importance of increasing the competitiveness of local companies.

Jabbarov considered it expedient to create a working group within the public-private partnership, consisting of representatives of relevant government agencies, international road transport companies and public associations in this area.

The minister of economy invited the representatives of international road transport companies attending the meeting to an active discussion and an open dialogue.

Azerbaijani Minister of Transport, Communications and High Technologies Rashad Nabiyev informed about the work done recently to develop the country’s transport and transit infrastructure, measures taken in the field of international cargo transportation.

It was noted that the total length of roads in Azerbaijan is more than 19,000 kilometers, and more than 4,700 kilometers of them are of national importance. After the restoration of the Azerbaijani territories liberated from the occupation, another 2,000 kilometers will be added to these roads. The liberated lands and new international transit routes that will be opened through Nakhchivan will further expand the opportunities for participants in the transport and logistics sector.

Rashad Nabiyev spoke about the necessary steps to increase the competitiveness of national carriers not only in the local market, but also in the region. The minister called on local companies to become part of the global network and to intensify their efforts on the integration into it. It was noted that local companies providing innovative, safe and reliable services can strengthen their position in the regional market as part of international partnerships.

The meeting participants voiced proposals in the field of international road transport, held discussions on the topic, and gave answers to questions from company representatives.